About Heritage Center at Kinderhaus 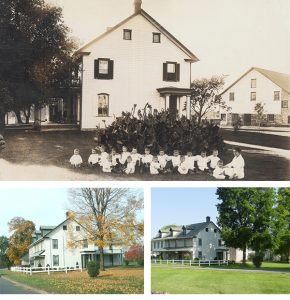 Originally constructed circa 1817, Kinderhaus is the oldest building on the Milton Hershey School campus. Kinderhaus is German for children’s home. The structure was originally a stone farmhouse built by Isaac Hershey, Milton Hershey’s great-grandfather. Milton Hershey purchased the home and surrounding farm in 1906 and used the property to house students beginning in 1912.

In 1932, Kinderhaus underwent extensive renovations and a large, framed addition was added to the rear of the house. Kinderhaus remained as a student home until 1996 when it was again renovated and began a new life as The Heritage Center at Kinderhaus and home of the Department of School History in April 2007. Kinderhaus is home to the majority of the school’s artifacts that tell the story of the Hersheys and the school.

In 2016, an exterior renovation exposed the east gable end limestone and gave the historic building a fresh facelift. The building was awarded the Hershey-Derry Township Historical Society Preservation Award in 2017 for adaptive re-use.