The History of Swimming at MHS

When Milton and Catherine Hershey founded the school and created the Deed of Trust, exercise and activity were crucial parts of the community they envisioned. The Deed of Trust specified that students receive “suitable and proper exercise and recreation.”

Since the first group of students who enrolled at the school were between the ages of four and eight, that meant plenty of outdoor activities. As the students grew older, other activities were added to the recreational programming, including swimming. Swatara Creek was a favorite swimming location.

Take a look at the history of the swimming program at Milton Hershey School!

When planning the first newly constructed building at the school—known as Ivanhoe, which opened in 1921—Superintendent George Copenhaver shared what he considered priority needs for students. This included a library, swimming and skating pool, a gymnasium, and a chapel. But when Ivanhoe was finished, it contained only one of Copenhaver’s requests: a gymnasium.

Even without a swimming pool, the school’s 1926 Viewbook describes the exciting activities happening on campus:

“What an ancient Greece we have become. During the summer we have baseball, track meets, broad and high jumps, quoits, tennis, swimming and hiking clubs, Boy Scout maneuvers, camping out and picnics.” 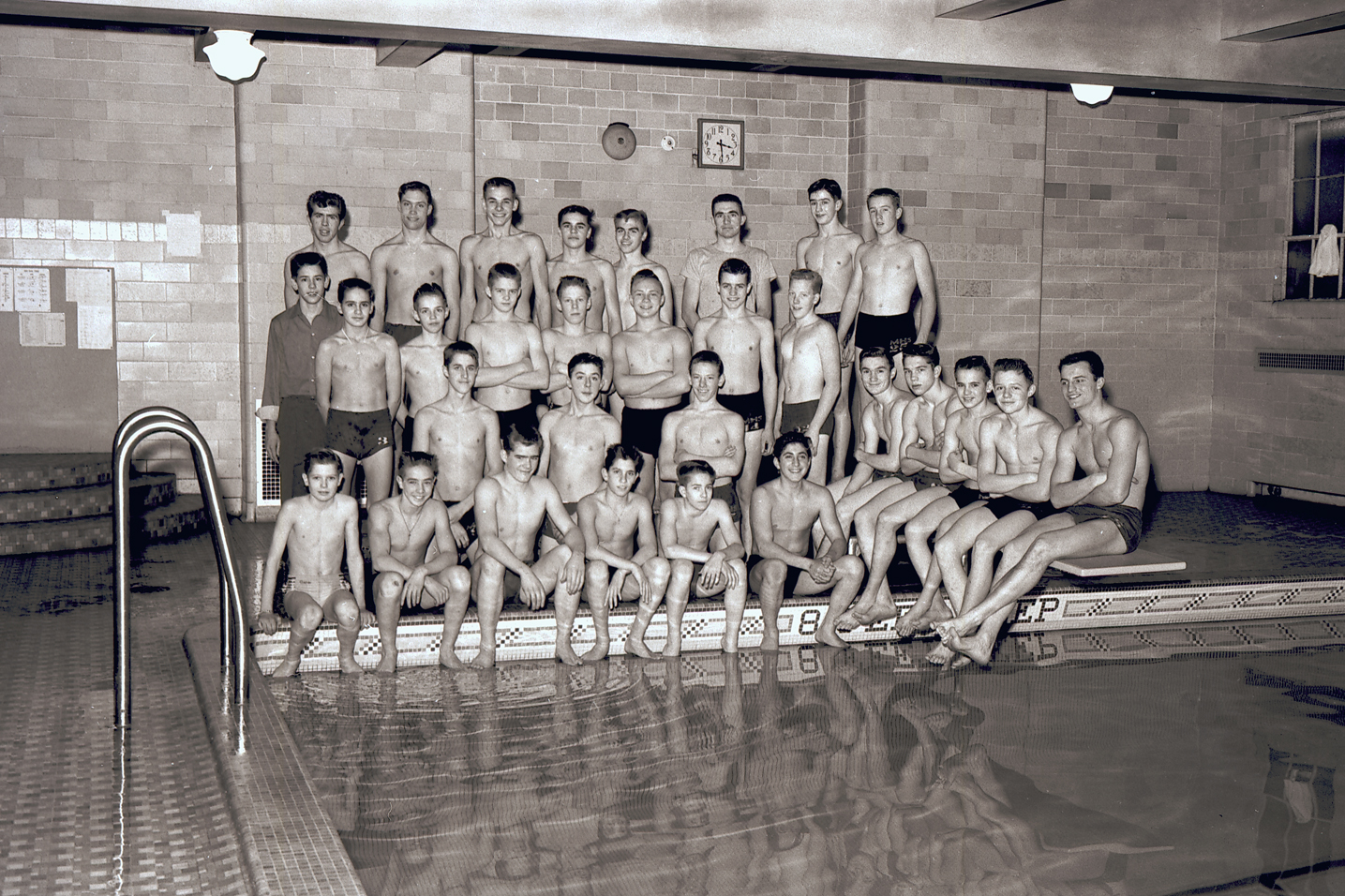 Swimming as a Sport

The Junior-Senior High School, which opened in 1934, also featured an indoor swimming pool

In 1935, the school’s Viewbook shared the hope that swimming would become part of the school’s athletic program: “At present the major sports include football, basketball, and track; but prospects for wrestling, swimming, and baseball are very encouraging.”

In the 1955-56 school year, these hopes became a reality. The first interscholastic varsity swim team was formed and described in detail in the 1956 Acropolis yearbook:

While swimming has been an integral part of our physical education program for many years as well as an important aspect of our year-round recreational program, a competitive schedule had not been part of these plans. Nearly all of our boys swim in some fashion, but this is not enough to participate in competitive swimming. The task of taking this unknown potential and developing it into a well-trained, well-disciplined team fell to Mr. John Tellet. His years of water activity supervision at Boy Scout camps and his own superior ability as a swimmer fitted him quite substantially for the job of coaching this beginning swimming team.

Although the team did not have a winning season, they were hopeful for the future because of the fundamentals they learned and their increased proficiency.

When the first Catherine Hall middle school opened in 1966, it featured an indoor swimming pool, which is now used by our varsity swim team.

And when the first group of high school girls enrolled in July 1978, they participated on the 1978-79 swim team.

The 1979 swim team, which included girls and boys.

Now, swimming continues to be a significant part of Milton Hershey School’s recreation program. All students receive swim lessons and must pass a swim test prior to graduation.

Along with proper instruction, the campus swimming pools continue to provide exciting health and wellness opportunities and help students develop skills they will use for a lifetime!