Growing up in Rochester, Pennsylvania, Sam Shouse ’08 lived with his single mother and two sisters. His mother always saw the value in a strong education and sent Shouse and his siblings to a private school until the cost became greater than she could afford.

In 10th grade, Shouse was faced with finding a new school to attend. When he started researching, he coincidentally found a pencil from Milton Hershey School that his family received at an informational session they had attended years ago. He saw it as a sign, and he and his mother quickly applied. After getting accepted, he made the decision to move over 200 miles away from his family and enrolled at MHS halfway through his sophomore year.

“I was really close with my mom, so it was hard to make that kind of move,” Shouse said. “But seeing how much she sacrificed for me by giving every penny she had for my education [over the years], I figured it was my responsibility to step up and make a big move by going to MHS.”

After growing up with two sisters, Shouse was excited to live with young men his age in a student home. He overcame feelings of homesickness and enjoyed building friendships with his classmates. As an eager and impressionable teen, having a solid male role model in his student home also was a nice change for Shouse.

“My time at Milton Hershey School was phenomenal,” he shared. “It was nice to have the family aspect to it, and live in a place where you knew you were going to be safe and you didn’t have to worry about having food to eat each night.”

Shouse was inspired by the chemical engineering field and completed the Drafting and Design career pathway—now known as Engineering and Design—as part of the school’s Career and Technical Education program.  Through the CTE program at MHS, he went on field trips and viewed real-world applications. He also became familiar with AutoCAD, a popular computer aided design program that most professional engineering firms use.

“The CTE pathway gave me problem-solving skills and [taught me] how to handle challenges,” said Shouse. “Teachers would drop everything they had to mentor and guide us. You could easily see the dedication of all the teachers wanting us to be successful and laying down that challenge.” 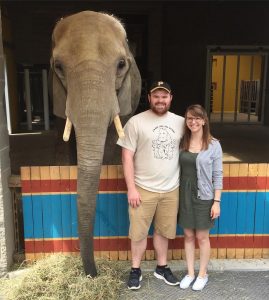 When Shouse graduated from MHS in 2008, he began his college career at Geneva College ahead of many college freshmen. He was already proficient with AutoCAD and understood the basic techniques, giving him more time to focus on some of his higher-level classes.

Time was especially important as he triple majored in chemistry, chemical engineering, and interdisciplinary engineering, and graduated in four years. While taking anywhere from 18-24 credits a semester, Shouse relied on his time management skills to keep him organized.

“I was in transitional living my senior year at MHS, so I already had the basis of how to set a budget and manage my time,” Shouse said. “It helped me learn how to prioritize things.”

Shouse now works as a chemist/chemical engineer at Sonneborn, one of the world’s leading manufacturers of specialty hydrocarbons. He is in charge of a pilot plant facility and ensures products meet high-quality standards as they replicate the company’s hydrogenation process on a smaller scale.

“I get to use both chemistry and chemical engineering every day,” Shouse explained. “I think there’s a stigma that engineers don’t like to get their hands dirty, but working on a pilot plant and basically running a process allows me to use my hands. I also get to use my chemistry expertise to understand the interaction of what’s going on.”

Thanks to the initial skills he gained at MHS and his strong work ethic during college, Shouse continues to find meaning and excitement in the field of engineering.