When NBC aired its live production of “The Wiz” Thursday, Dec. 3, 2015, Milton Hershey School alumni might have recognized one of the ensemble members as Marcus Paul James ’99. James sang and danced through the show and was featured as a winkie messenger in service to Evillene, the Wicked Witch of the West (Mary J. Blige). It’s the latest of many successes James, a 2012 MHS Alumni  Achievement Award winner, has enjoyed since arriving in New York to launch his musical career 12 years ago.

“I’ve been blessed and spoiled,” says the actor, singer, and songwriter who was in Japan as associate choreographer for a tour of “Rent” when he got the call about “The Wiz.” Shortly after moving to New York, James was cast as Tom Collins in the national tour of “Rent.” He then moved to the role of Mr. Jefferson in the closing cast of “Rent” on Broadway in 2005.

“That has put me on a path where I’ve gotten to perform in Pulitzer and Tony award-winning shows,” he says referring to “In The Heights” and “Motown the Musical,” which James describes as “the biggest and most unique show ever to hit Broadway.”

James began rehearsals for “The Wiz” on Oct. 5, spending 14-hour days, six days a week singing, dancing, and blocking for the three-hour live show which featured Queen Latifah, Mary J. Blige, David Alan Grier and Ne-Yo with Fatima Robinson as a choreographer. Segments of the rehearsals and production experience were featured in “The Making of the Wiz” on NBC on Nov. 25.

“It’s just amazing—there are so many mediums coming together from Broadway stage show to television and live television,” says  James. “With the elaborate choreography and amazing singing, it’s unlike anything that’s been done before.”

James grew up in Brooklyn, raised by his mom, and came to MHS at the start of his freshman year in 1995. Though he sang in the church choir and learned to read music in public school, once he acclimated to the dramatic change in environment—from twiggy city trees to Hershey’s rolling hills and farm animals—he found many new outlets for his musical talent at MHS.

“The opportunities at MHS were like nothing I had ever heard of before,” says James. 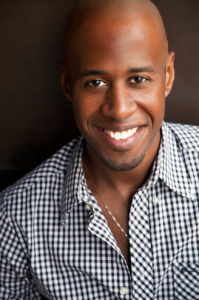 “I sang in church every Sunday; performed at every family weekend; enjoyed music class with Ms. (Cristal) Janderchick (now Sheaffer) and sang in every choir including county, regional and district chorus; took dance lessons with Mrs. (Glynis) Gaylor; participated in dance team, and was part of a thespian club when Mrs. (Janice) Stewart came back my junior year. Literally, performing is all I did all the time.”

He recalls being part of a “whole cavalry” of performers who participated in everything together including Edwin Vega ’98, Cheryl Davis ’98, and Ingrid Perez ’98. When it was time to apply for college, James followed the path of friend Melanie Gerald ’97 and studied musical theatre at Penn State University.

James values the lessons he learned at MHS, especially about his worth. “It’s important to know your worth as a human being and what you have to give on this Earth. That stays important because people will try to take that from you. But no one is special and no one is ‘less than’ because of where they came from. I think that’s something Milts learn as they develop pride in their house and its unique characteristics. It’s been important to me in this career to know that who I am is not just a list of things I’ve done on a piece of paper.”

Though he admits he’s not the best at maintaining communication with teachers and friends from MHS, he hopes to return to campus sometime in the near future. He’s always happy when math teacher Sharon Henry tracks him down when she brings students to see a  Broadway show, and he cherishes the experience that is shared only among Milts.

“It’s such a unique place and experience, something that only another Milt can understand. No one but another Milt knows what a ‘meal bus’ is or how to clean a bathroom within an inch of its life, but that’s what happens, you all share that core history,” he says.

After “The Wiz,” James says the sky is the limit.

“There’s no end to the horizon,” he says, noting recent work has included the release of recordings of his original music (he’s been writing songs since his MHS days), recording for “America’s Got Talent” and a performance at Carnegie Hall. “Right now in my career, all the lights are working on my control board and anything I want to do is possible.”

For more information about Marcus Paul James, to hear his music and stay connected, visit MarcusPaulJames.com.