Alexis Quinn ’14 has been playing soccer for 17 years. Originally from Gloucester, Virginia, she enrolled at Milton Hershey School when she was in seventh grade and joined the school’s family-oriented soccer team. 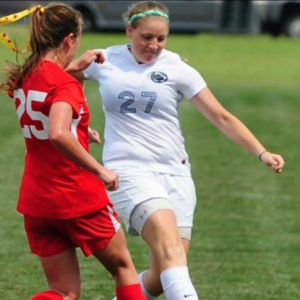 “I love the physical mentality of soccer and putting everything on the line for the game,” she said. “You have to be able to use your entire body, not just your feet.”

During her time playing soccer at the middle school and high school level, she thrived in the position of goalkeeper. As she approached graduation, her head coach at MHS helped her get recruited by Penn State Harrisburg.

“At MHS, my coaches and team members were like a big family,” Alexis said. “All the memories from high school carried on with me to college, and it’s something I’m never going to forget.”

Alexis transitioned to the midfield position during her freshman year of college, which gave her the chance to develop her field skills. College also helped her develop her academic skills and ability to prioritize. As an electrical engineering technology major, she balances her study time with year-round soccer practices and games.

“It takes a lot of composure and time management to be able to manage soccer and school,” she said. “I  have a calendar with all my exam dates and game dates, so every day I know what I’m doing. MHS definitely helped me understand the concept of time.” 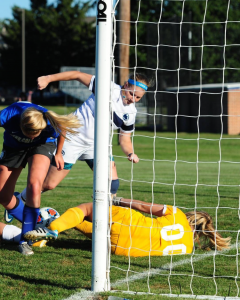 As she prepares for her senior year at Penn State Harrisburg, Alexis is reminded of the emotions she felt during her senior year at MHS. She plans to pursue a career in the engineering field after graduation and play soccer at the recreational level.

She also has valuable advice for current high school students who want to play at the college level:

“Keep going to practice, but also do things outside of practice. Go to the gym, run, and work to [improve] your skills on your own. You don’t always need the team to make yourself better,” she said. “I highly recommend playing in college, even if it’s at the Division 3 level which is what I play. I’m still playing soccer, and it’s something that feels great to me. That’s all that matters.”