Jocelyn Bioh ’01 has always loved performing and knew from her time at Milton Hershey School that she belonged in the arts. She was recently recognized as the MHS 2022 Alumna of the Year.

Today, Jocelyn is a performer and an award-winning writer in theater, TV, and film. “MHS was the opportunity of a lifetime,” she shared. “It gave me a step up toward success that likely never would have been possible for me.”

Jocelyn described the impact of MHS on her life as immeasurable. “I did not come from a family that had wealth or access, and we really had to fight for whatever we earned,” Jocelyn said. “Getting the opportunity to go to MHS—where I didn’t have to be concerned about anything financially—allowed me the mental space to grow as a person and an artist. That impact changed my life as it crystalized for me that this is what I wanted to do with the rest of my life.”

Space to Grow as a Person

Jocelyn enrolled at MHS in August 1995 when she was 12 years old and ready to enter seventh grade. Prior to her enrollment, Jocelyn lived with her mother in a small one-bedroom apartment in New York City.

Jocelyn’s parents had divorced, her older siblings were away at college, and the bills and college fees landed on her mother’s shoulders. She worked multiple jobs, including one as an overnight home health aide, often leaving Jocelyn home alone. This went on for two years until Jocelyn’s godfather learned about MHS through his daughter’s college roommate, who happened to be an MHS graduate. 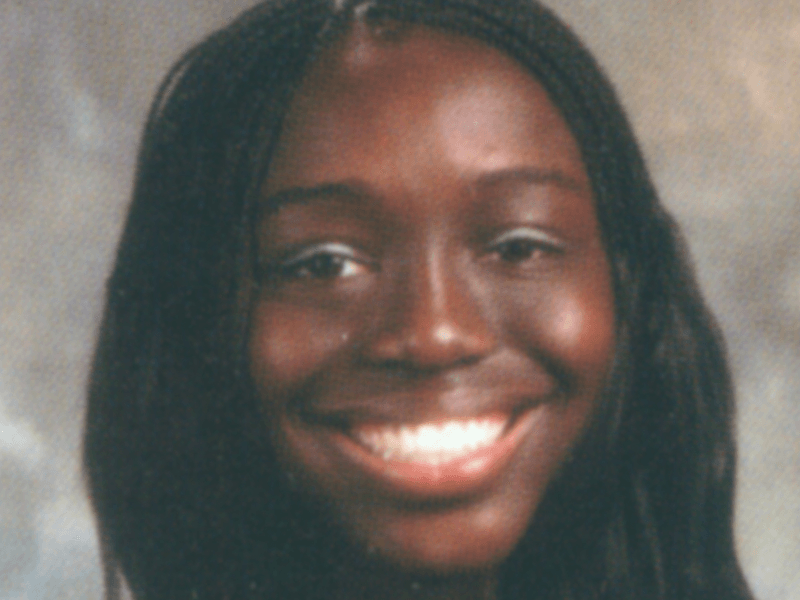 It wasn’t long before Jocelyn found herself on the path to success as an MHS student. During her first days at MHS, Jocelyn was surprised to be living in such a large student home with access to unimaginable resources. When her houseparent said during dinner one night that he would take the students to Hersheypark, she couldn’t believe they could simply go to an amusement park on weekends. “I was born and raised in Washington Heights; ‘the park’ was always a place that had a slide and some swing sets,” she said.

It was those nights spent at Hersheypark with friends—many of whom remain very close to Jocelyn—that became some of her best and fondest memories. “I think of those moments all the time,” she shared. “The fun, free, and pure joy-filled moments of those days.”

Larry and Soundra Muhammad were Jocelyn’s houseparents during most of her time at MHS. Their student home was consistently filled with humor, music, singing, and dancing. “When I think of the Muhammads, I think of how funny they were. Both of them loved to joke around and had the best laughs, which I really enjoyed,” she shared. 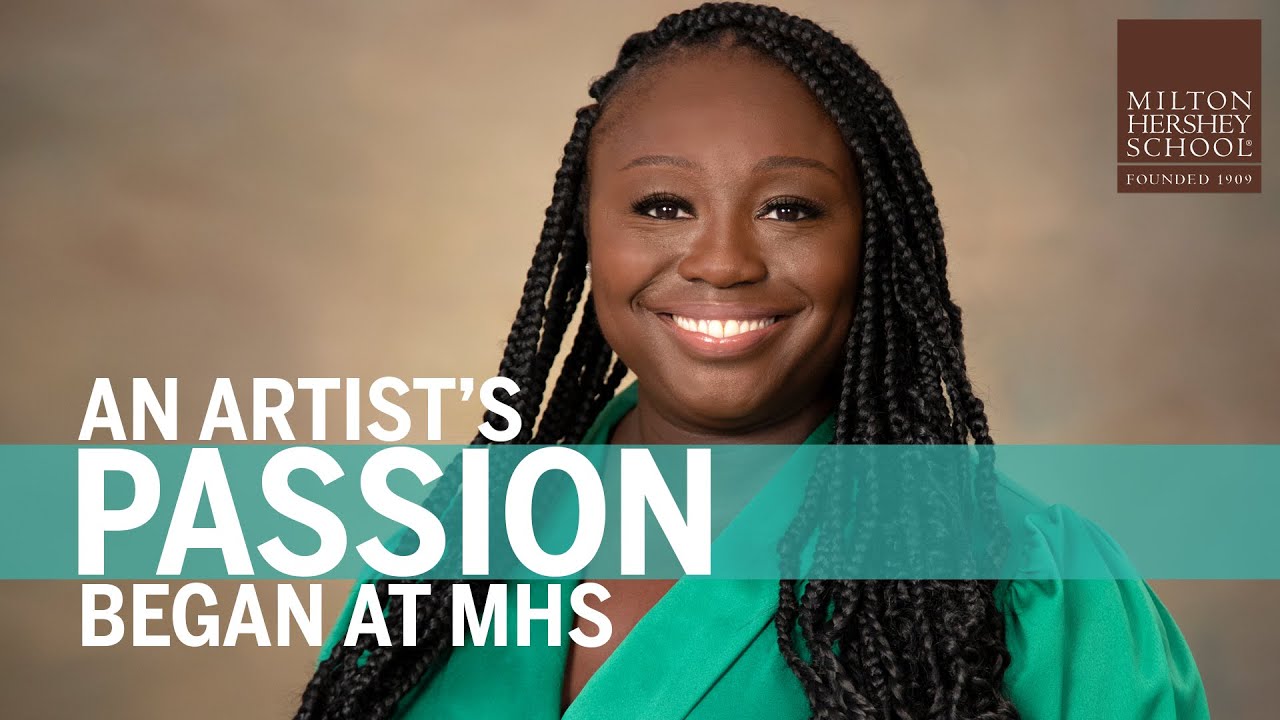 Jocelyn was involved in the Visual and Performing Arts (VPA) program at MHS, including several choral groups from seventh grade through senior year. Dance, however, was her first love-landing her a spot on the competition dance team during her last three years at MHS. She grew up dancing at the local community center arts program in her neighborhood and was thrilled that MHS offered a dance program too.

“Ironically, theater was not top of mind for me until the last two years of my time at MHS,” Jocelyn said. She did, however, star in her very first play, “Pretty Fire,” during her senior year.  The play was written by Charlayne Woodard—who Jocelyn was able to meet years later. They are now friends who keep in touch, sharing a deep connection to what originally inspired Jocelyn to go into theater.

Aside from her involvement with VPA, Jocelyn also participated in high and long jump as part of the MHS track team and was a cheerleader for football and basketball. 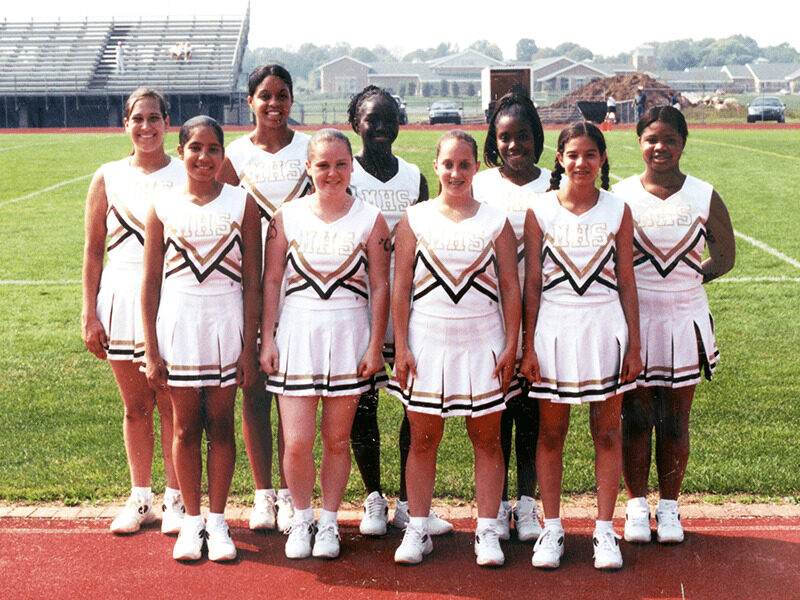 In addition to participating in Visual and Performing arts programs, Jocelyn was a cheerleader for football and basketball.

Being Her Greatest Self

“My passion for being a detailed and thorough storyteller was certainly nurtured at MHS because of the amazing teachers who fostered our talent,” she shared. “They knew that many of us were good and knew that we could be better, and they pushed us to be our best. I will always appreciate them for that.”

In the area of visual and performing arts, Jocelyn said three teachers stand out: Cristal “Ms. J” Janderchick, now Mrs. Sheaffer, her choir teacher and New Horizons leader; Ms. Janice Stewart, her drama teacher; and Ms. Glynis Gaylor, her dance teacher. “I don’t know where I would be as an artist today if these three incredible women hadn’t poured into me and nurtured my talent,” she said. 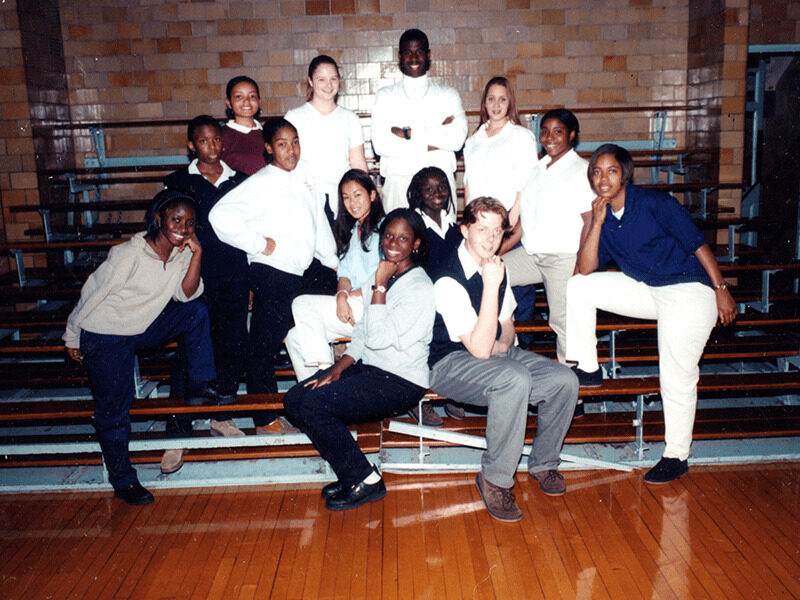 Jocelyn landed a spot on the competition dance team during her last three years at MHS.

Jocelyn’s teachers also instilled foundational skills she holds on to today: Ms. Sharon Henry, who taught math and made her feel capable; Ms. Suzanne Arnold, who made science fun; and Mr. Cudworth and Mrs. Staples-Farmer, who were the first people to tell her she was a good writer. “In hindsight, their compliments stayed with me and gave me the confidence I would eventually need in my profession,” Jocelyn said. 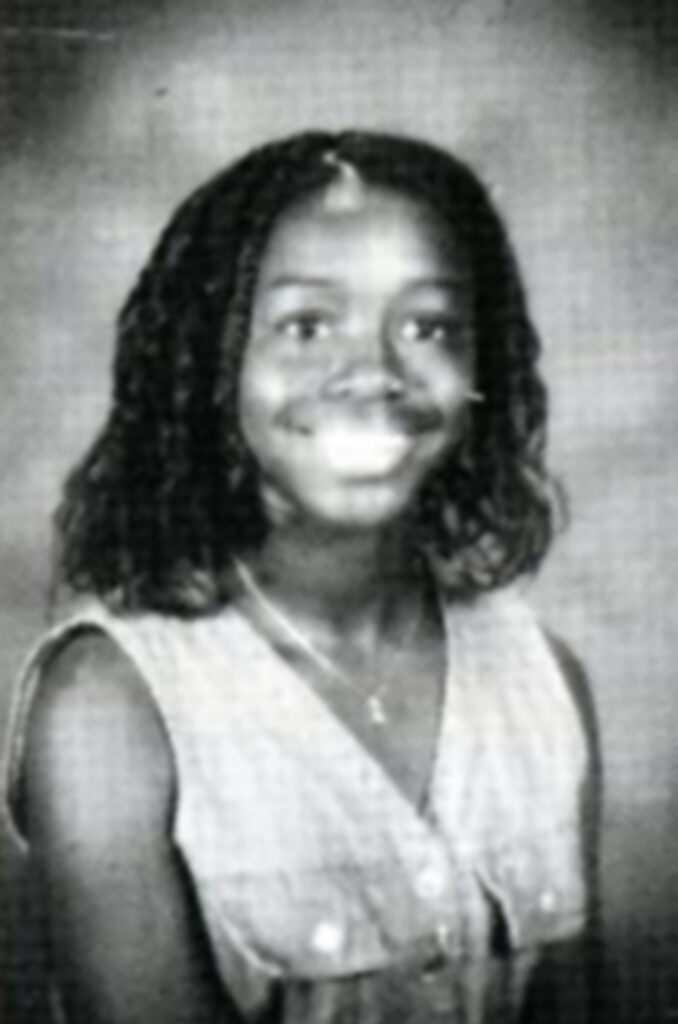 The diversity of the student population at MHS is also evident in Jocelyn’s work. “It was the first time that I had been around and knew so many kids whose parents and families were similar to mine. Meeting and knowing other African kids and sharing our experiences was a huge impact on me, as I would eventually go on to write all of my plays and scripts about those experiences,” shared Jocelyn.

During her time at MHS, Jocelyn learned to speak up for herself and pursue what she wanted without fear. When challenged by a difficult dance sequence or a choir solo, she focused on being the best she could be. “To be in the entertainment business, you need to have tough skin, and I feel like MHS really prepared my spirit for this.”

Among the foundational skills Jocelyn learned at MHS was being disciplined about her work. “Perhaps I had always been this way, but I feel like I developed my Type A personality when I was a student at MHS,” she said. “I always made lists of everything I needed to do and was incredibly disciplined about my time—I never liked wasting time. Even when I would allow myself downtime to watch TV, I was always stretching or rehearsing a dance routine. I had a deep desire to always keep learning and improving.”

Jocelyn experienced the highs and lows of being a writer and performer in New York City, including the rejection and financial struggles that she said felt endless. Eventually, in 2007, her discipline paid off and she booked her first major commercial gig when she was selected as a spokesmodel for Queen Latifah’s makeup line, the “Cover Girl Queen Collection.” 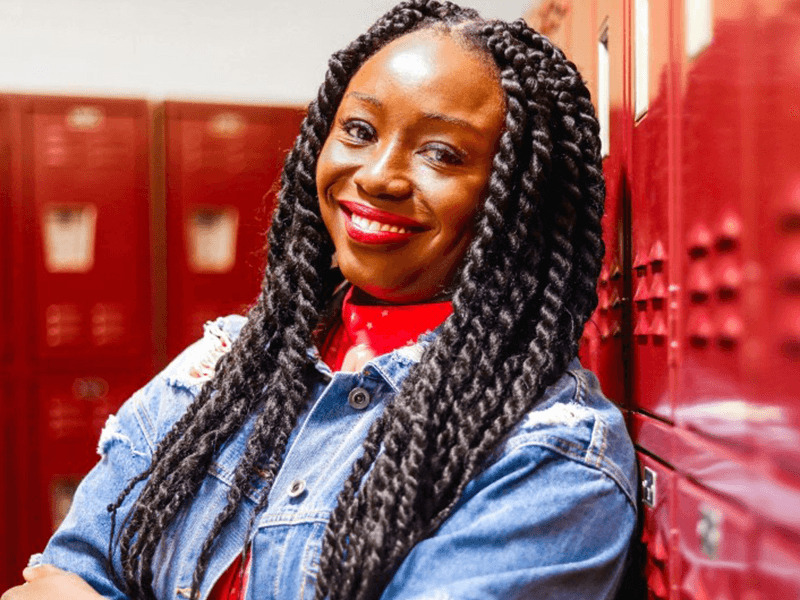 She went on to star in “Neighbors,” her first professional play off-Broadway, which debuted at The Public Theater in 2010. From there, she worked regionally for many years, starring in several plays in Philadelphia, Vermont, Connecticut, and Pittsburgh. In 2014, she booked her first Broadway show as a cast member: “The Curious Incident of the Dog in the Night-Time,” which won the Tony Award for Best Play that season.

That same year, she started writing several plays. One of which was “Nollywood Dreams” which eventually debuted off-Broadway in 2021. After leaving “The Curious Incident of the Dog in the Night-Time,” she worked on a new production inspired by many things in her life, but namely her experience as a student at MHS. That play was “School Girls; Or, The African Mean Girls Play,” which was produced off-Broadway in Fall 2017 and went on to become a major hit that season. It garnered rave reviews from The New York Times and The Hollywood Reporter and won several awards, including an African Diaspora Award, Hull Warriner Award, and the Lucille Lortel Award for Best Play. Since then, “School Girls” has been produced more than 50 times all over the United States, Canada, and is to have a major production in London in 2023. Her current project, “Goddess,” is bound for Broadway after its debut in August 2022 at Berkeley Repertory Theatre in California. 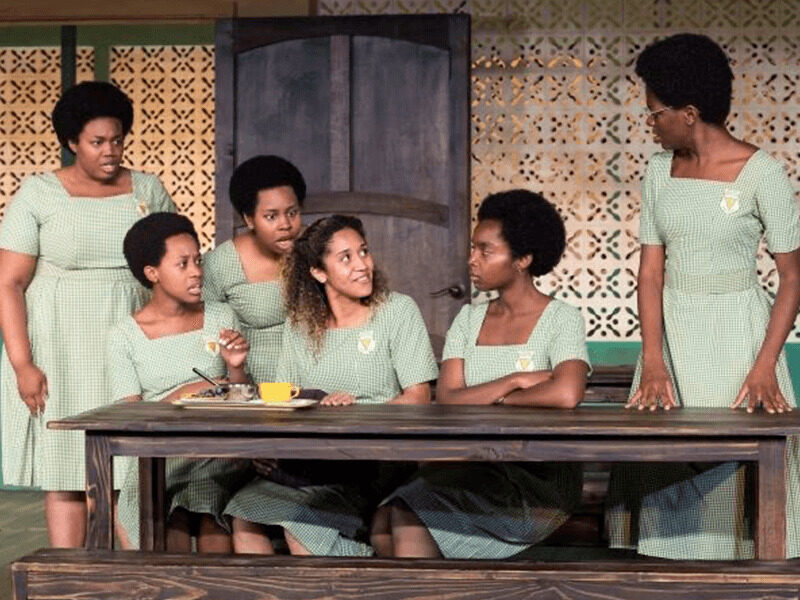 “School Girls; Or, The African Mean Girls Play,” written by Jocelyn, was first produced off-Broadway in 2017 and garnered rave reviews from The New York Times and The Hollywood Reporter and won several awards.

Jocelyn has returned to MHS for class reunion celebrations and continues to have a strong bond with friends she met at MHS. In 2008, she was inducted into the Spartan Hall of Fame for her accomplishments as a student in VPA. 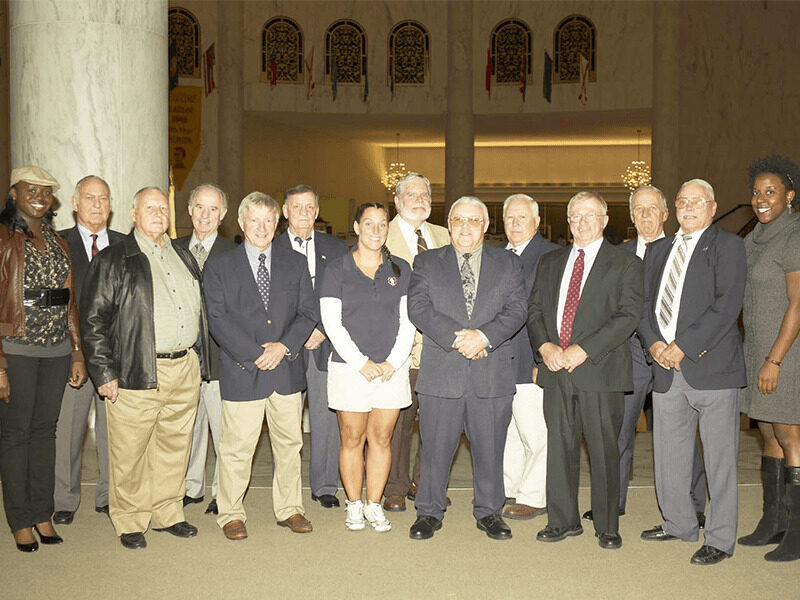 In 2008, Jocelyn was inducted into the Spartan Hall of Fame for her accomplishments as a student in Visual and Performing Arts

In January 2015, a group of MHS students traveled to New York City to see Jocelyn perform in the “The Curious Incident of the Dog in the Night-Time.” After the performance, Jocelyn made time to join the students, MHS staff, and several other alumni for dinner. She talked about making sacrifices and working a variety of jobs to help pay the bills, while also trying to establish a career in the arts.

For current MHS students, she offers this advice: “Success is in the details. It’s all about your own discipline and making sure you know everything there is to know about the thing you love and want to do the most,” shared Jocelyn.

Talking about her own passion, she felt like there was a huge void in storytelling that centered around Black women’s voices and wanted to use her voice to fill that gap.

Outside her professional work, Jocelyn enjoys the work of her colleagues in theater. She said she sees a show either on or off Broadway a couple times a week. She also remains heavily involved with Black Women on Broadway, an organization she co-founded. The organization celebrates Black women artists in theater in New York City through mentorship and education opportunities. It has an active social media presence, and in 2022, it launched its flagship event, The Inaugural Black Women on Broadway Awards Celebration—the very first theater awards to honor Black women.

Jocelyn is engaged to be married to Austin Smith in Fall of 2022.

As she reflected on being named 2022 Alumna of the Year, Jocelyn said, “I truly do not feel worthy of this incredible recognition, but I am humbled and honored to accept this. Being the youngest and the first Black woman to receive this prestigious honor is one that is hard to put into words. One of MHS’s beacons is their incredible diversity and I’m proud to be the vessel in which that touchstone is being spotlighted.”

Nominate a Graduate for the Award