Milton Hershey School’s high school social studies teacher, Megan Kopp’s lesson plan to reinvigorate how World War I is introduced in classrooms was published nationally this week by National History Day ®. The lesson will also be featured in the upcoming publication, Great War, Flawed Peace, and the Lasting Legacy of World War I. 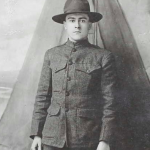 Megan created the lesson plan while participating in Memorializing the Fallen, a nationally recognized teacher development program, this summer. In addition to the lesson plan, Kopp composed a eulogy for a “Silent Hero” who gave the ultimate sacrifice in the war. She profiled Private Freeman Wilbur Bower, of Clinton, Pennsylvania, an engineer with the U.S. Army during World War I.  Her tribute to Bower details his early life, role during the war, and the unsuccessful efforts of his family to recover his body upon hearing of his death.

“As a veteran, and with many family members who have served or are currently actively serving, this was a very important project for me. It is an honor to share this research and help history come to life in classrooms around the world.” said Kopp. “I hope to show that what happened a century ago in Europe impacts the military structure we know today.”

Kopp’s eulogy and profile of Private Freeman Wilbur Bower can be found at NHDSilentHeroes.org. Her lesson plan, Coming Home: The Doughboys Return to Civilian Life, is published on World War I page of National History Day’s website.

Watch the passionate eulogy that was recorded during her trip to Europe in June 2019: