The Namesake of Gratitude: Milton’s Journey

After growing up in Miami, Florida, Milton was 12 years old when his family moved to Newark, New Jersey. While the city and schools he called home may have changed throughout his childhood, his interest in education never wavered.

“I was always a kid who actually liked school, and in Newark, I was never around those type of people. It was always noisy. Nobody ever cared about school, so the teachers didn’t care about school either. People didn’t really understand the importance of education,” Milton said. “But here [at MHS], the other kids care about school … teachers tell us the importance of education and the effect it has on our future. It really sticks with us.”

Named after his uncle, Milton enrolled at Milton Hershey School as a freshman without realizing just how significant his name was to the school that was founded by chocolate magnate, Milton Hershey. Milton liked the idea of being independent and had been researching the school for three years before being accepted.

“I had a friend at my old school who told me about MHS. She talked about it like it was the best thing in the world, so I decided to look into it,” he said. “I was really hooked. I wanted to come here—I knew it. The first time I told my parents, they were completely against it, but after three years of talking to them about it, they decided to let me go.”

During his first few weeks on the MHS campus, Milton visited the school’s clothing center where he received a full wardrobe. He also met his houseparents, Clare and Will Ogle, and the boys who live with him in the student home.

“The first time I met the Ogles, I was pretty sure they were going to be nice people. And they turned out to be nice people times a million,” Milton shared. “They really show that they care about us and that they love us. It’s really different because I never got that type of treatment every single day from people.” 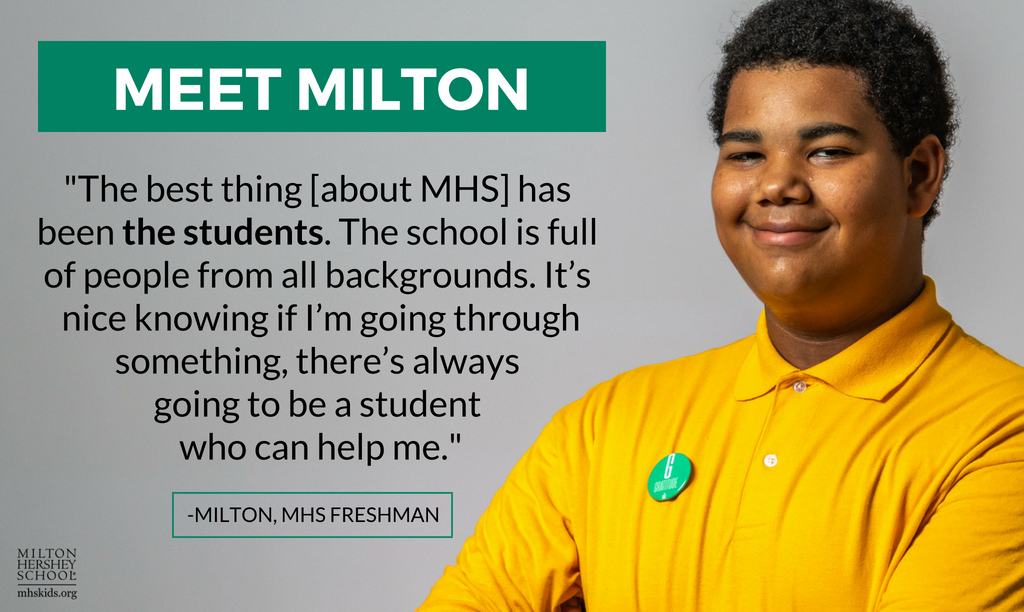 Described as a sincere, grateful, and caring student, Milton also has formed strong friendships during his first month on campus thanks to the welcoming atmosphere and the common bonds he found with his classmates.

“The best thing [about MHS] has been the students,” he said. “The school is full of people from all backgrounds. It’s nice knowing if I’m going through something, there’s always going to be a student who can help me.”

As he continues to get involved on campus and discover his passions—right now, he’s interested in geology and science—Milton is grateful for the people around him and the opportunities ahead.

“Gratitude is something that’s just a part of me. I knew if I stayed where I was, I would have had such a difficult time getting to where I want to be in life … but MHS gives me all these opportunities,” he said. “I feel like it’s important to tell the houseparents, teachers, and everybody here that what they’re doing is helping change kids like me and all my fellow classmates’ lives.”

As the entire MHS community embraces the theme of gratitude throughout the school year, Milton is just beginning to understand the true impact of the Hersheys’ gift.

“Milton Hershey put so much into this school to help us, and I don’t fully understand that yet. I’m hoping to understand why he would do that. I’m pretty sure it was just the kindness of his heart,” he added.