Hershey and the surrounding areas have been flooded with so much rainwater this summer. The fact that the grass in my yard was brown earlier in the summer and now couldn’t be any greener points out the irony of the situation.  We were in such a dry, tough spot that when it started to rain, people were really happy. It was a relief. It was an outpouring of a precious resource that we hadn’t had enough of earlier in the summer.

I think we can all agree that water is a valuable resource.  But in excess, with nowhere for it to go, the water becomes stagnant and dangerous. Parts of Hershey flooded, and parts of the MHS campus flooded. Thankfully, we all remained safe but many people in the local area lost valuable, irreplaceable things because we simply had too much water.

This is the way it is with precious resources.  Not having enough is bad, just like in June when it was very hot and dry.  Crops and plants were wilting, but after having an extreme excess of water, I realized that resources in excess can wreak havoc. If you don’t keep water and other precious resources moving, they build up and causes problems.

Take, for example, the resource of money. Not enough of it can be problematic, but we often seen how too much money can go to people’s heads and ultimately become dangerous.

Milton Hershey worked very hard and tried unsuccessfully for many years to make a lot of money. He knew what it was like to be poor—to do without the precious resource of money.  And then, it happened.  He became successful. He made a lot of money. If he had kept all of that money for himself, maybe it would have wreaked havoc as it does with so many people.  But Mr. Hershey knew the best way to enjoy his wealth was to give it away, spread it out, and keep it flowing so it wouldn’t cause problems.

By giving the bulk of his wealth 100 years ago to fund Milton Hershey School, Mr. Hershey truly lives on forever as a life-giver and a life-changer. 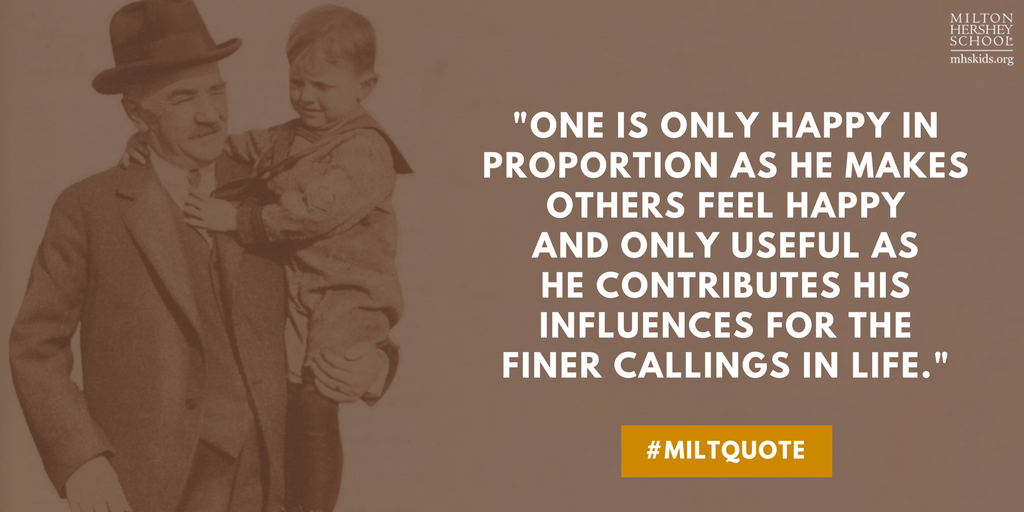 He knew that stockpiling resources, whether it be water or money, wasn’t a good idea. What good is it to have something if you can’t share it with others? As Milton Hershey said, “One is only happy in proportion as he makes others feel happy and only useful as he contributes his influences for the finer callings in life.”

I, along with so many others, am grateful for the gift Milton Hershey poured out to those he knew and those he would never meet.​

Learn More about Houseparenting at MHS