Prior to 1943, Hershey Industrial School (now Milton Hershey School) and Hershey High School never had the opportunity to compete in football. To give the boys some friendly competition, the two schools created the Cocoa Bean game. 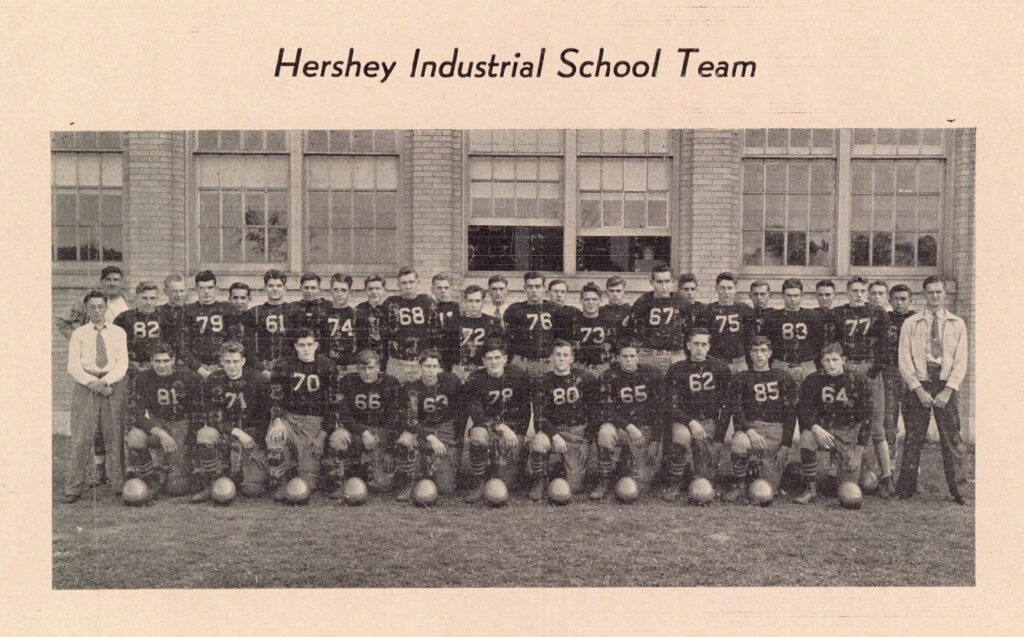 Supported by the Rotary Club of Hershey and the Hershey Civic Club, the game served as a benefit to fund Christmas boxes for the men and women serving in the Armed Forces. The 1943 game marked the first time the schools faced each other in football competition and the tradition has remained to this day.

Learn more about the history of the Cocoa Bean game. 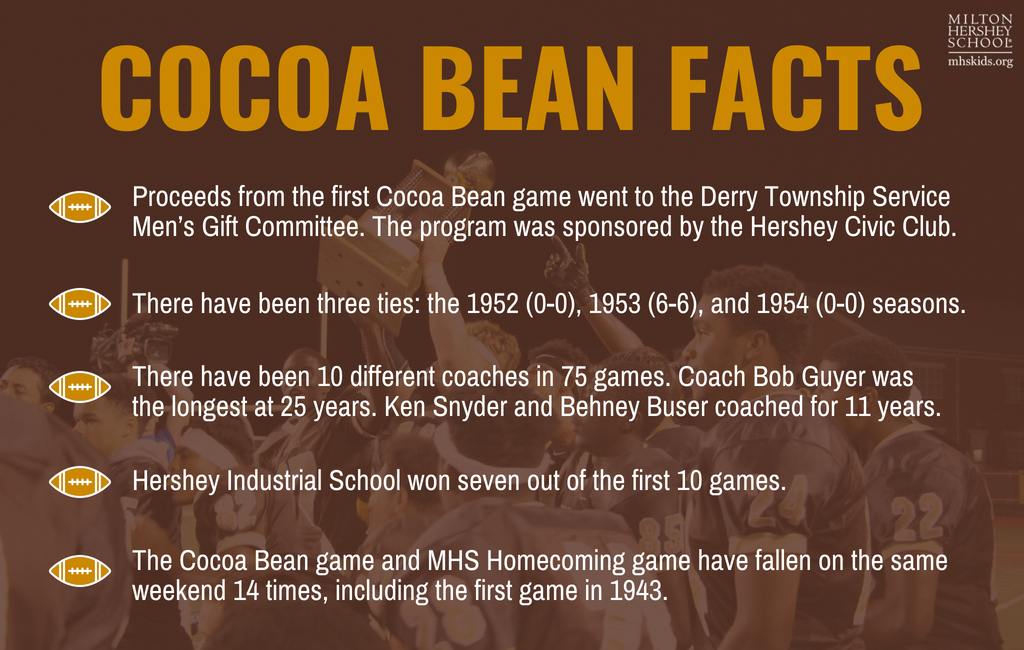 Hershey Industrial School did not play football in the 1942-43 school year because of gasoline rationing and shortages during World War II.

Because of the shortages, the school’s 1943 football season got off to a late start. The team had only three weeks to practice before the first game on Oct. 22. They won three of their four games but lost the last game to Hershey High School with a score of 14-7 before 4,000 fans in the first-ever Cocoa Bean game.

The student-produced School Industrialist publication reported, “The Brown and Gold squad never gave in, but the game proved that it lacked experience.”

The first Cocoa Bean program outlined the schools’ vision for the game: “We all hope…the game will result, not in bitter rivalry, but in friendly competition, and that this will be the first of annual contests on the gridiron between the high schools of our community.” 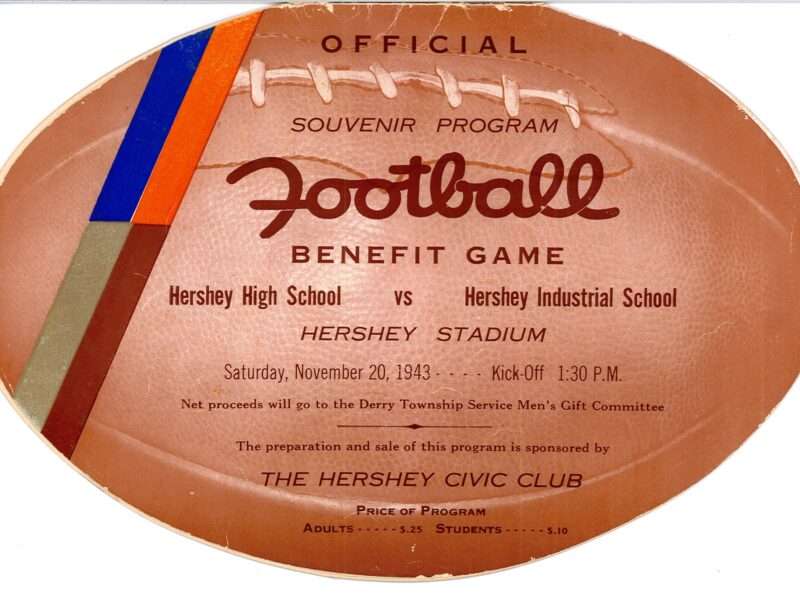 An advertisement by the Hershey Chocolate Corporation added this sentiment:

May this, their first gridiron meeting
Mark the beginning of a new era
In good sportsmanship and friendly feeling
Which will serve to stimulate us all
In the heavy duties which lie ahead!

On Sept. 12, 1970, the Cocoa Bean game fell on a celebratory weekend which included Homecoming, Milton Hershey’s birthday, and the dedication of Founders Hall. 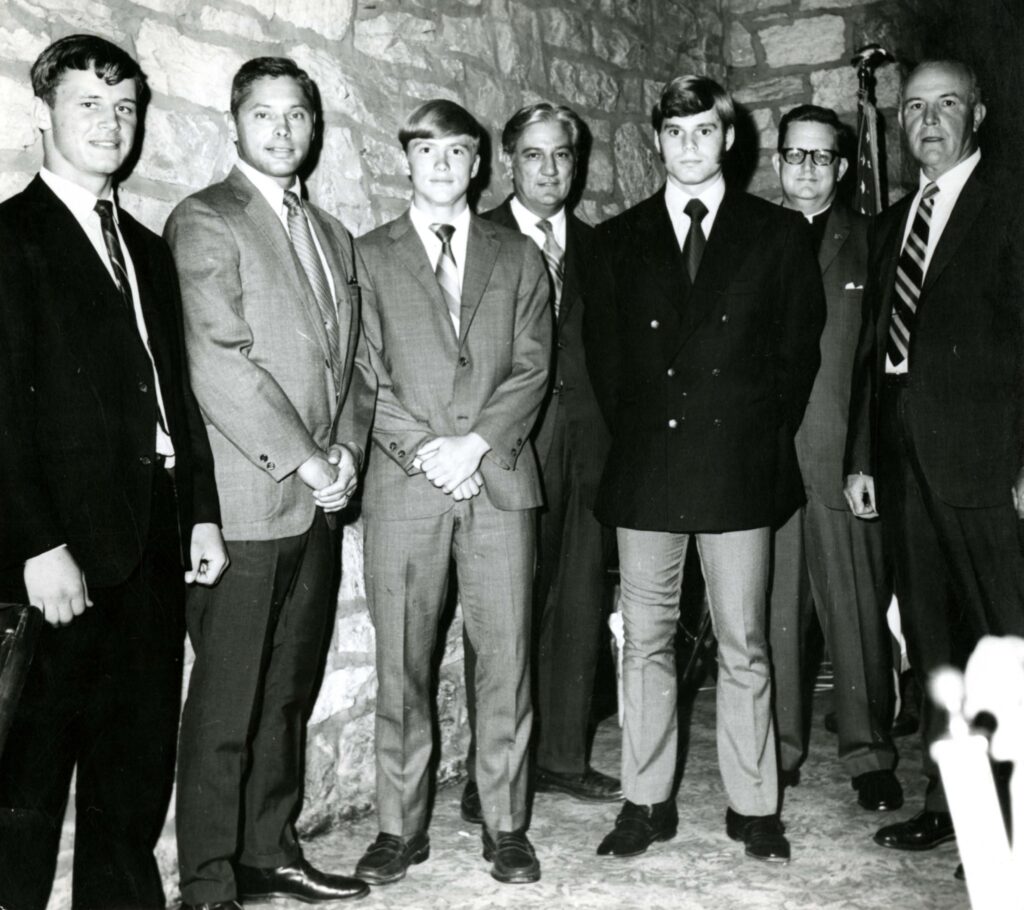 The Cocoa Bean game tradition is woven into Milton Hershey School’s history. Although there have been discrepancies in the game score record in recent years, the MHS Department of School History and Hershey Community Archives joined forces to conduct research confirming the record. It currently stands at MHS 36 wins, Hershey 38 wins, and three ties.

Each year, athletes from both schools are eager to win the coveted Cocoa Bean trophy. Because there was no Cocoa Bean game in 2020, this year’s 78th match-up will prove even more special.