As a Milton Hershey School graduate, Algene Sajery ’95 not only gained a second family in Hershey, Pennsylvania—she also grew to love philanthropy and a commitment to service that was sparked by the good nature of the people at MHS.

“I was someone who benefited from people who had the spirit of giving back. I grew up in a very tough environment,” she explained. “I benefited from the good heart and good nature of other people, and it gave me a sense of commitment to helping others.”

Algene enrolled at MHS in 1991 as a freshman in high school. She grew up in Staten Island, New York. 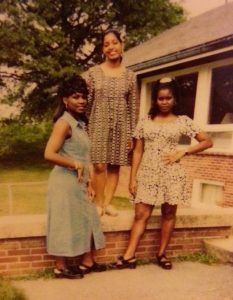 “I lived in a rough neighborhood,” she said. “When I was in junior high I had to fight my way home or would get threatened. It was like what you would see in videos, concrete jungles, lots of drugs, and my mom kept me sheltered. She was extremely strict and was always afraid that I would fall into the wrong thing.”

Algene describes herself as a bright student. In middle school, she was accepted at several top science and technology high schools in the New York City area but her mom worried that during nights and weekends, Algene was still living in a bad environment. It was a friend of her mom’s that introduced them to MHS.

“I only grew up with [only] my mom and my brother, so coming to MHS was overwhelming for me,” she said. “But on my first day [at MHS], I met a young lady who I am still friends with to this day and she helped me get through it. She was very smart and she taught me all about Black writers and Black history, because again, I grew up very sheltered.”

When Algene arrived in Hershey, Pennsylvania, she said the transition was initially difficult because she was shy. But by establishing friendships based on shared experiences during her formative years, those friendships helped her evolve, come out of her shell, and realize who she was as a person. 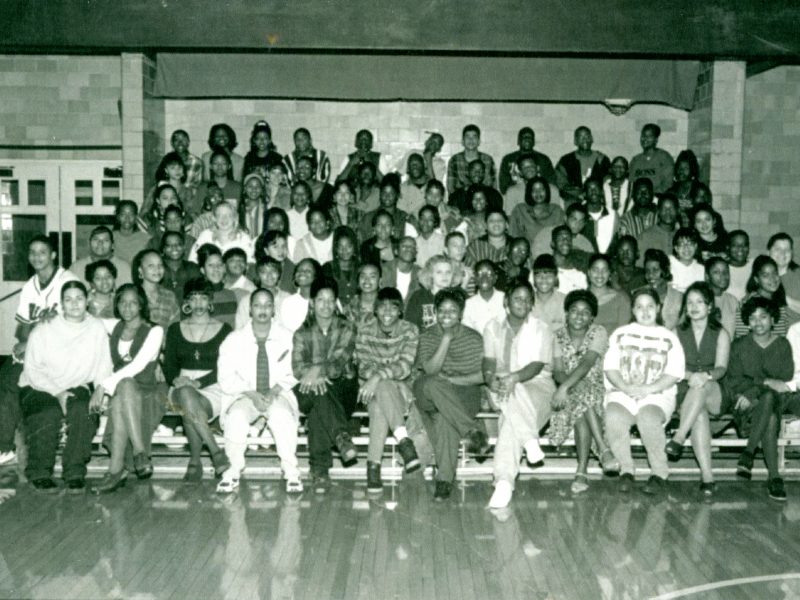 As someone who grew up in a strict household she shared that it wasn’t until she arrived at MHS that she learned about self-awareness and who she was outside of her family. Something she explains, not every teenager gets to experience during those formative years.

“You make these friends at Milton Hershey School that are often lifetime friends. When I came to Milton Hershey [School] I was in ninth-grade and at that age you are discovering yourself and you’re away from your family and learning about other people. You have these deep conversations at MHS and you lean on each other because you’re all coming from places of adversity.” 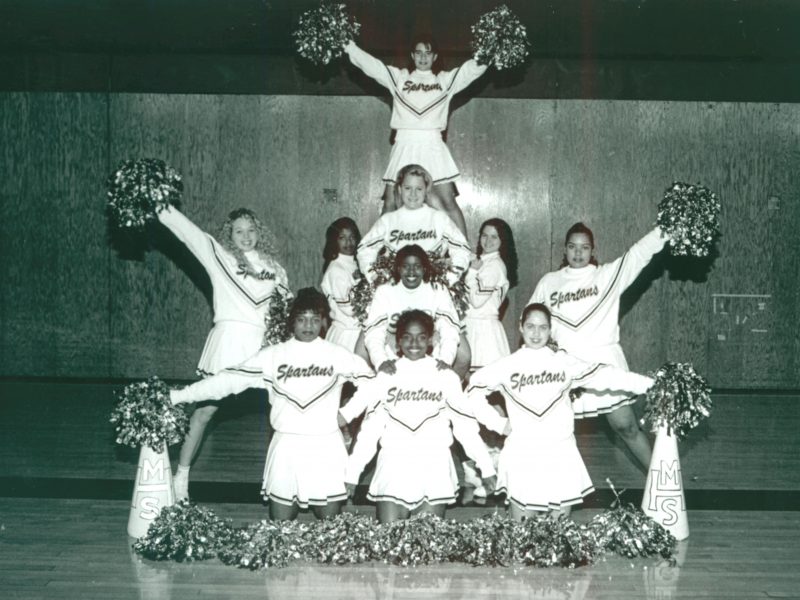 MHS cheerleading squad in the fall of 1992.

Algene also gained foundational skills, from her time at MHS, that she continues to apply in her professional life today. Skills like perseverance, integrity, authenticity, resourcefulness, dependability, and being someone who actively contributes to society and positively impacts their community. 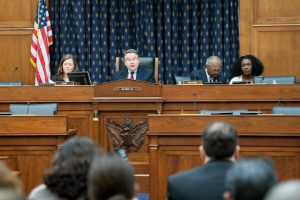 After graduating from MHS in 1995, Algene went to college at Howard University in Washington D.C. where she became interested in public policy. During graduate school, she completed a policy internship at the U.S. Capitol and spent almost 20 years working on Capitol Hill. While there she held several leadership positions, including as the first woman of color to serve as Democratic Policy Director for the esteemed Senate Foreign Relations Committee. 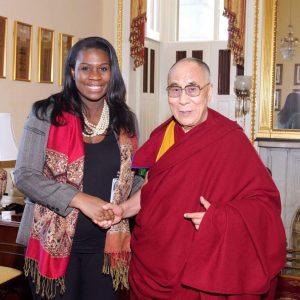 Currently, she is the Vice President for the Office of External Affairs for the U.S. International Development Finance Corporation. In this capacity, she leads a team of public affairs, intergovernmental relations, and stakeholder engagement professionals. Together they cultivate the DFC’s relationships with Congress,federal agencies, the business community, civil society groups, and other key stakeholders to advance DFC’s mission to improve international development in lower- and lower-middle-income countries. Algene is a member of the DFC’s Executive Leadership Team and helps lead major initiatives on women’s economic empowerment, global health, and inclusive growth. She also holds a seat on the DFC’s Investment Committee, providing input on all projects valued at more than $20 million, and engages with the agency’s Board of Directors. 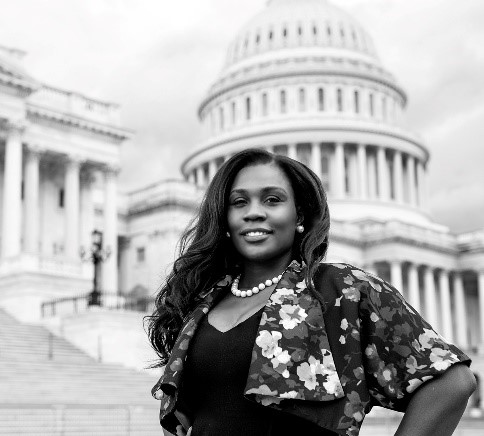 When asked where she finds her passion for the work that she does, Algene said it started from her upbringing.

“I’ve been hungry as a child. It’s something you don’t ever forget. So, I like to work on issues that address the challenges of global insecurity and resource scarcity, human rights, governance, and the precursors to violence. Addressing these challenges can help improve the global community.”

During the COVID-19 pandemic, Algene started to dabble in podcasting. It led to the creation of “The Minority Leaders with Algene Sajery,” a podcast about the career journeys of women of color in business, politics, and policymaking, as well as the importance of mentorship—something she feels very strongly about.

“It is extremely important to have mentors—especially those that look like you and those who look nothing like you, but who can help you develop some of the soft skills that are outside of what you learn on the job or in the classroom.” 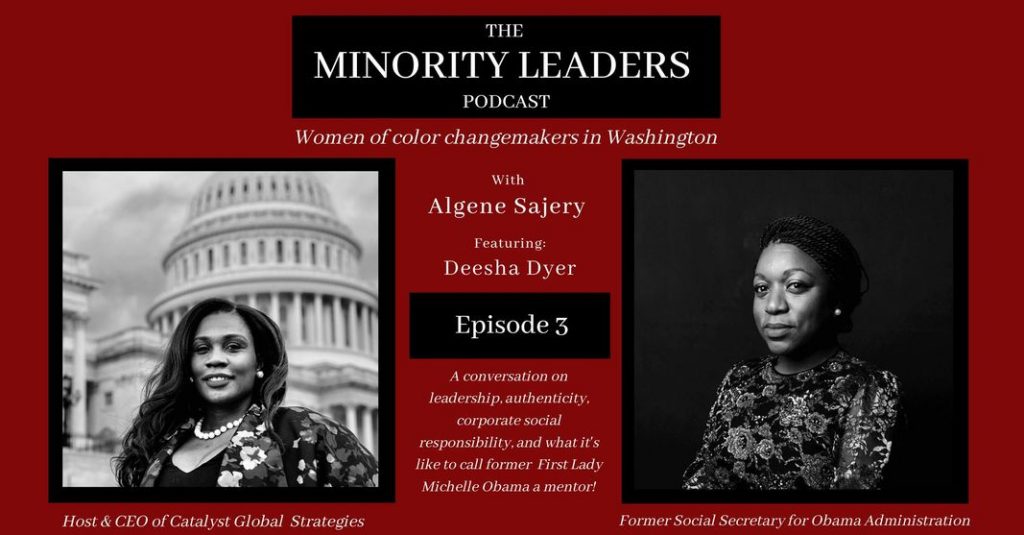 Algene says it’s things like how to make eye contact, how to be there for people, how to follow up, how to handle conflict, how to empathize with other people’s points of view—those skills that come with emotional intelligence.

She said she’s inspired by Milton and Catherine Hershey and their vision to help kids who can’t help themselves.

“I think it’s one of the reasons that I started in the social services field and doing domestic anti-poverty work. It’s because I was the beneficiary of that kind of service. Mr. and Mrs. Hershey’s legacy gave opportunities to kids like me.”

But it wasn’t just Mr. and Mrs. Hershey who helped her along the way. It also was the MHS community past, present, and future that inspired her.

“I’ve always been so amazed that someone helped me at a time when I needed it … it was the MHS community and the school that helped change the course of my life. It made me realize that because I was a beneficiary, I now have to be a good global citizen and someone who looks out for her community because someone was looking out for me.”