During his first few days at MHS, Landon was doing great. It was new and exciting—he had new friends, new toys, and a new school! The school days were filled with amazing activities, and there were eight students in his class. What an amazing opportunity to have such a small student-to-teacher ratio.

For me, my transition over the first few days was probably the worst pain I had felt in my personal life in a very long time. I spent time doubting, questioning, feeling lonely, and being concerned about how he was doing. Each time I thought about picking him back up from MHS, I would get a picture, a phone call, or an email.

I was constantly being reminded that this is right. It’s the right choice for him. I won’t pretend and say it was easy, but I will say it was worth it. 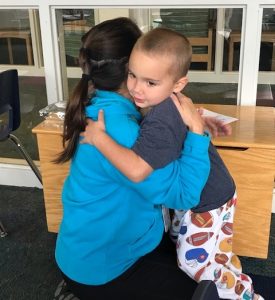 Landon did great initially, but then he started to really miss home. He needed to know I was truly going to be coming back. The houseparents, teachers, and staff were all in agreement that a visit was necessary. There are many expectations and guidelines in place, but whenever something doesn’t seem to be going right, I know the team at MHS will come together and talk about what’s best for the child.

I’ve learned to have complete confidence that Landon is who matters, and he may be different than others. What works for him might not work for someone else, but the staff all take time to learn those things and make sure they are making the decision that’s best for Landon. Having the confidence that they have him at the center of it all is always so rewarding.

I’ll never forget picking him up for our first-weekend visit.  I felt whole again, and his hug was tighter than it had ever been. And guess what? That weekend felt more wonderful than ever before. All of the stressors I talked about in Part One didn’t exist. I was able to focus on spending amazing, quality time with him. We played, read, and talked about how proud I was of him for being such a brave young boy. We talked about his friends, housemates, his houseparents, and his teacher.

The calmness he had as we talked was incredible. The stress and anxiety I used to see in him was so much less. He didn’t seem worried anymore each time I left the room. There were so many positive changes happening so quickly.

When it was time to go back to the student home on Sunday night, I got out the calendar. We talked about when we would be together again. I remember pulling into the driveway, trying to hold back the tears, and seeing his eyes start to get a little bit sad. But then, as we pulled in, those sweet little boys were running down the driveway to greet Landon with the biggest hugs saying, “We missed you!” He quickly hugged them, but started running past them into his houseparent Mr. Leary’s arms who was so happy to see him again.

That was the moment I knew Landon was where he was supposed to be. Remember, this is a boy who had never been okay if I left the room and wasn’t comfortable hugging anyone other than a few of us.

The next few weeks were touch and go. We were both very emotional, and sometimes had great days while others were some of our worst. I spent a lot of time working closely with his houseparents and teachers on how often we should communicate, what to expect, how to help Landon with his homesickness, and how to work with him at home on things he’s learning at school.

Over time, each visit home seemed to come at the perfect time. The visits do so many great things for both of us and allow us to have such quality time together.