When Tylor Teel ’11 enrolled at Milton Hershey School as an eighth-grader, he thought he wanted to enter the world of criminal justice when he graduated. But after diving into the MHS experience and sampling different career pathways within the school’s Career and Technical Education Program, he discovered his true passion.

“During my junior year, I had the opportunity to take an elective,” Teel said. “I remembered that I had really enjoyed Mr. Garcia’s architecture class during my freshman year, so I figured I would choose another architecture class as my elective. I fell in love with it.”

Thanks to Mr. Lou Garcia’s class, Teel focused the rest of his time at MHS on the Engineering and Design career pathway—which is targeted towards students who want to pursue architecture, engineering or advanced design. As students move forward in the pathway, they must choose to concentrate on engineering or architecture.

“I chose architecture because I like more of the design aspect than the mathematical aspect,” he explained. “With architecture, I learned I had complete control over where I wanted to go…I could set the next statement, rule and innovative idea. I’m a creative person, so [architecture] is the perfect creative outlet.”

After graduating from MHS, Teel attended Lehigh University to study architecture and focus specifically on design. He took trips to New York City to study historic buildings and also participated in on-campus, team-building activities where he learned skills such as how to tile and mix concrete.

Teel described his program as hands-on and time-consuming. To ensure he always submitted timely, accurate work, he relied on the focus and independence he gained at MHS. 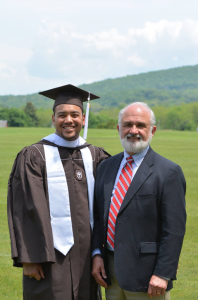 “While I was [at MHS] there were rules, but in hindsight, I was still very independent and still made my own choices,” he shared. “That was a wakeup call in preparation for college and the real world.”

Just like the field of architecture, MHS also helped Teel realize he was in full control of his future.

“What happens to you in the past doesn’t define your future,” Teel said. “I learned a great amount of accountability and integrity [at MHS]. Ultimately, admitting you’re wrong shows more character than lying.”

After his recent graduation from Lehigh—which Mr. Garcia attended—Teel plans to pursue roles in the project management sector of architecture and possibly obtain a master’s degree. He credits MHS and dedicated educators like Mr. Garcia for giving him the opportunity to discover his passion and motivating him to execute his goals.

“Mr. Garcia is the one who pushed me towards architecture, and he encourages every student to put their best foot forward,” Teel explained. “He sparked our independence. Initially, we may not have had confidence but he helped bring it out. That’s what I admire most about him.”