When Kate Casey ’95 enrolled at Milton Hershey School as a ninth-grader, she immediately connected with people due to their shared life experiences. Kate helped organize a school-wide event in her junior year where she spoke at an assembly. After opening with a joke and hearing people laugh, she distinctly remembers feeling like it was what she was meant to do.

Along with her love of people, she also found she had a deep love for politics. Kate graduated from MHS in 1995 and went to college in Washington D.C. to study government. At an alumni chapter event in the city, she met an older MHS graduate who worked at The White House and was willing to give her a chance with an internship.

Kate continued to thrive in public speaking settings. She remembers the sound of congressmen and senators laughing at her jokes during a speech she gave for the Democratic Caucus to introduce President Clinton. She also remembers the rush of starting her own legal public relations firm when she was 28, using her political and communication skills to benefit others.

After Kate gave birth to her first child, she found an outlet for her comedy by creating a humorous parenting blog.

“I’ve been fortunate because I’ve been able to pursue two things I love so much,” Kate explained. “[Working in public relations] was intellectually stimulating and every day was different. There was a lot of thrill in the job just like there is in comedy by getting people to laugh and writing something that resonates with them.”

Eventually, Kate decided to focus on her comedy and writing full-time. She continued to publish parenting humor and television recaps on her blog, while also serving as a contributing writer for major websites like “The Today Show.” She wrote a book, created a podcast, and began performing stand-up comedy routines. It wasn’t long before Kate found success, thanks to her creativity and intense work ethic. 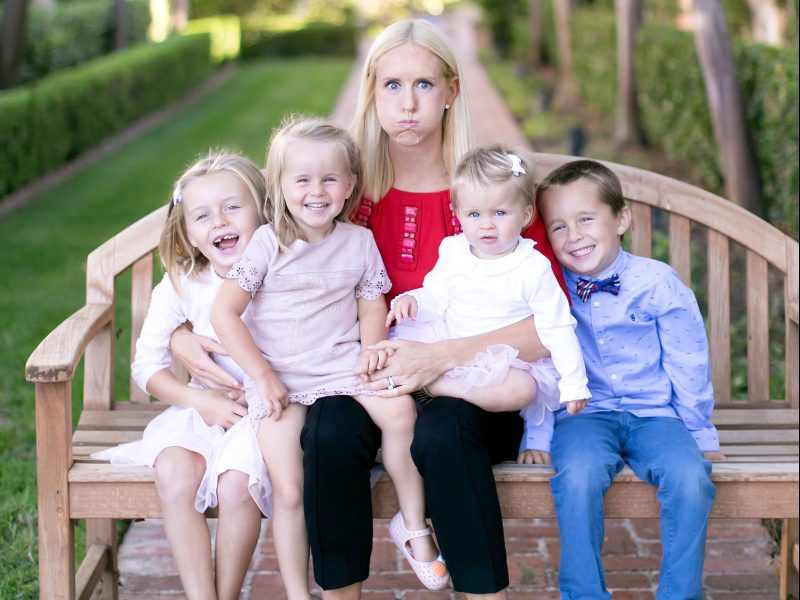 Kate and her four children.

“I’m a hard worker. I’m constantly networking, and I write all the time. If I’m in the car waiting to pick up the kids, I’m writing,” she said. “What you think you’re going to do at age 25 probably won’t be the same at age 40. So take a job, because experience is currency. Those who work are four steps ahead of everybody else.”

As she builds rapport with her audience and creates connections with popular publications, Kate remains humble and focused on the creative process.

“You’re only as good as your last piece or joke,” she said. “I have to be creative all the time. I constantly have to come up with new ways to make people laugh.”

Where does she get her confidence? Kate believes her challenging past, along with the empathy she learned at MHS, helps her connect with people when she’s on stage. She views comedy as a great coping mechanism.

“I’m a curious person, but MHS made me even more curious about people,” Kate explained. “We lived in a family-style situation with people of every race, creed and demographic. MHS made me really empathetic, and I learned I can talk to anyone.”

As Kate builds a name for herself as a writer and comedian, she continues to create goals and never forgets the importance of hard work. She hopes to do more on-air segments, host her own television show, and create a legacy as a “modern-day Erma Bombeck”—an American humorist who wrote a popular newspaper column describing suburban home life in the mid-1960s.

She also enjoys catching up with her friends from MHS, especially when they come out to watch her perform stand-up comedy.

“I think most kids who went to Milton Hershey School were born with a survivor chip. I have a lot of friends who went to MHS who have become incredible successes and are awesome people,” she added. “The circumstances of their childhood did not affect their success in life. I’m grateful for the opportunity.”