Jamie Arnsparger ’94 is a broadcast operations manager with Discovery Communications. He oversees the day-to-day operations at the U.S. and Latin America Broadcast Facility, which 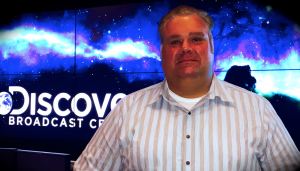 originates over 60 networks, broadcasting to 50 countries. He also oversees most of Discovery Communications’ major live events, such as Skyscraper Live and Barrett Jackson Auto Auctions.

Jamie attended Mansfield University for a year and then left to pursue a television job with NBC in Hagerstown, Md. He spent eight years there before moving to Discovery in 2005.

Reflecting on his time at MHS, Jamie remembers the opportunities he had to learn about the TV world and the other life skills he learned there.

“Without MHS, I would not be the person I am or be where I am. I was absorbed into everything TV at MHS” said Jamie. “Plus, I can do some mean housecleaning!”

He wants current students to be aware of all the opportunities available at MHS. “Take advantage of everything offered, you’d be a fool not to. Whatever you want to do in life can be accomplished at MHS.”