When you ask Eric Shirley ’14 about his time at Milton Hershey School, he immediately talks about how incredibly thankful he is for the positive relationships he created with MHS employees. 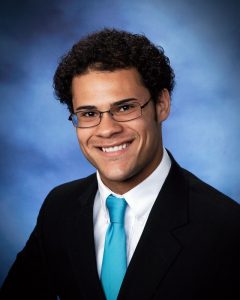 “[The staff] at MHS helped build my character,” he said. “They helped me grow and become the young man they knew I could be.”

Eric enrolled at Milton Hershey School in 2006 as a fifth-grader. He took advantage of the many opportunities provided to him at MHS, including athletics, but it was the Construction/Carpentry career pathway within the school’s Career and Technical Education program where Eric found success.

“My carpentry teacher Mr. Richard Mattis ’63 was cool, laid back, but also meant business,” he said. “He pushed me to become the best carpenter I could be. He knew my potential and awarded me the ‘Shop Award’ at graduation.”

After graduating in 2014, Eric took a year off from school. Through the relationships he established at MHS, Eric was able to get a job working in the MHS Structural Trades Department.

“The year I worked at MHS helped me in many ways, which is another reason I’m thankful for MHS,” he said. “During the time I spent working there, I learned a lot about my future career goals. The guys in the shop helped me learn, gave me advice, and advanced my carpentry skills.”

Following his year working at MHS, Eric attended Thaddeus Stevens College of Technology to study carpentry. He graduated in May 2017 and is beginning his career as a construction manager.

“I never realized the impact these individuals had on me until I left [MHS],” he said. “I believe life is about the people you know and the relationships you create. Anyone can make a difference in your life; sometimes they come unexpectedly, and those are the difference makers.”

In the top photo, MHS employee Donna Gordon attended Eric Shirley’s awards dinner at Thaddeus Stevens College of Technology in May 2017. He received the award for “Most Dedicated Student.”