Christine (Brennan) Cook ’81 has been teaching at Milton Hershey School for 35 years. She was recently recognized as the MHS 2021 Alumna of the Year.

MHS has been her life since she was young, and she is forever indebted and eternally grateful. From the time she was a 6-year-old girl visiting an older brother who was enrolled at MHS before her, to being a long- tenured teacher 51 years later, MHS has been a central part of her life. 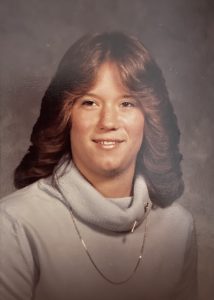 While her mother, Ann, raised her and provided her with solid foundational skills, MHS provided Chris with opportunities. At MHS, Chris had the opportunity to work and live with others, to connect with strong mentors who are still a part of her life, and to milk cows. MHS made it possible for her to go to college and graduate with no debt, teach, coach, and do what she loves while earning a living to support a family. She also was able to continue her education and learn, grow, stretch, and improve. Above all, Chris could share her love of MHS with family.

Chris was 15 when she enrolled in MHS in 10th grade on March 5, 1979. She was familiar with the school, though, having made frequent visits with her mother to see her brother, Tom Brennan ’79. “The beauty of the rolling hills and countryside and cows and horses was quite different from my row house in Philadelphia with no yard at all,” said Chris.

Her father, James Joseph Brennan, Jr., died at age 41 from a heart attack, leaving her mother with four children and a small income with her beauty shop in the basement of their home. Chris was the youngest at age 4. “Mom was absolutely amazing, but always wanted something ‘more’ or ‘better’ for us than what she felt Philadelphia public schools could offer and wanted us to have a father figure in our lives,” Chris remembers. Her sister, Pat, and brother, Jim, were 17 and 16 when Mrs. Brennan learned about MHS. At the time, girls were not yet able to enroll, and Jim was too old. 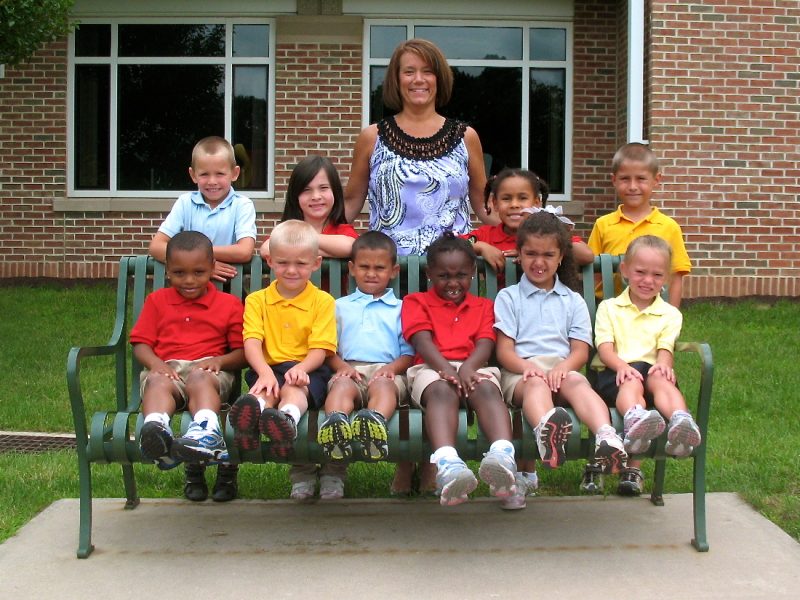 Chris with her students on their first day of school in 2011.

Chris remembers feeling more excitement about Enrollment Day than sadness in leaving her mother. “All my life, I kind of always wished I could attend MHS, but it was an all-boys school,” Chris said. When MHS announced it would begin to enroll girls, Chris’ mother submitted an application for Chris as soon as she could. During her 10th-grade year, Chris was eligible to enroll, but since she played on a basketball team soon to enter playoffs, MHS graciously extended her enrollment date to March. 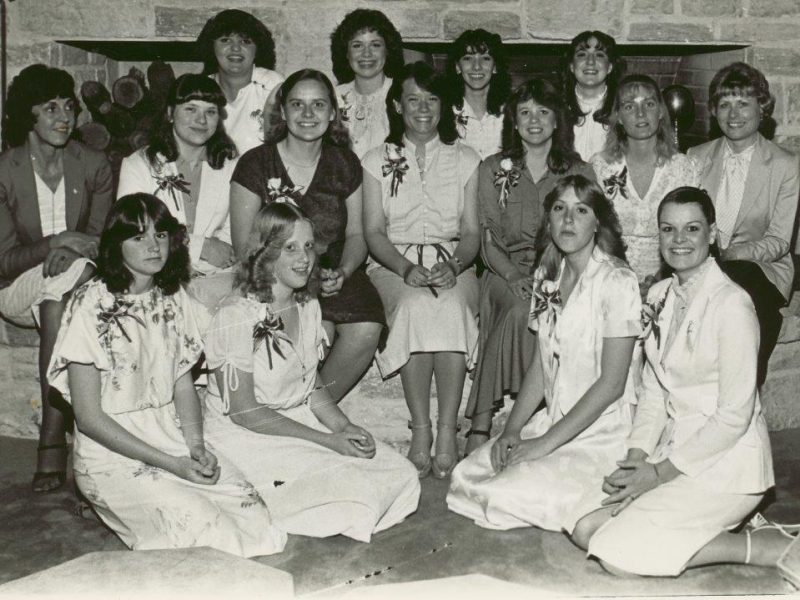 Chris’ first memories as a student were sitting with Gerry Long ’55, orientation director, at Copenhaver Center, formerly Catherine Hall, for orientation. She looked forward to spending the day at Senior Hall, now Catherine Hall, where her brother, Tom, was a senior. Her initial memory of student home life relates to chores. “Cleaning what was already sparkling clean seemed a bit crazy to me, and milking cows was a whole new experience for this city girl,” Chris observed.

Unlike today where classes are equally divided, there were more boys than girls when Chris enrolled. “I grew up as somewhat of a tomboy, so being with guys was not strange to me. I suppose being around girls was strange for the guys in my classes,” Chris added.

Chris established friendships that continue today with classmates Charlie Lister, Dottie (Halbleib) Rosenberry, Dave Walker, Lynn (Troischt) Scully, and Virgil Whitsett, and Maria Ferreira ’83. The Lister family and Chris’ family still gather together regularly. “The bonds cannot be described, and no matter how infrequently we gather in person, we always pick up as though we were never apart. To this day, Charlie, Lynn, and Dave are my very favorite friends to golf with as well,” Chris said.

She also recalls the excitement of being at MHS for a few short weeks when the Three Mile Island crisis sent students home for an extra week at Easter Break. Later for an environmental science class, the students visited TMI on a field trip with science teacher Ed Ruth to learn about nuclear reactors and how the accident happened. 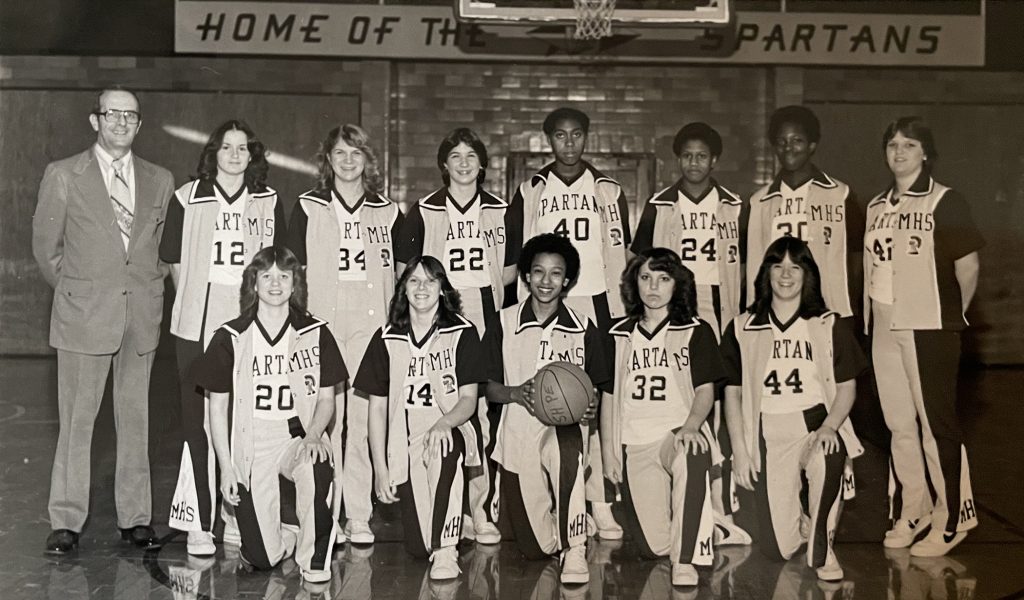 With so few girls, the teams were not competitive, but Chris said they did have fun. In addition to sports, Chris was a member of the Student Leadership Society, National Honor Society, student government, and band front. 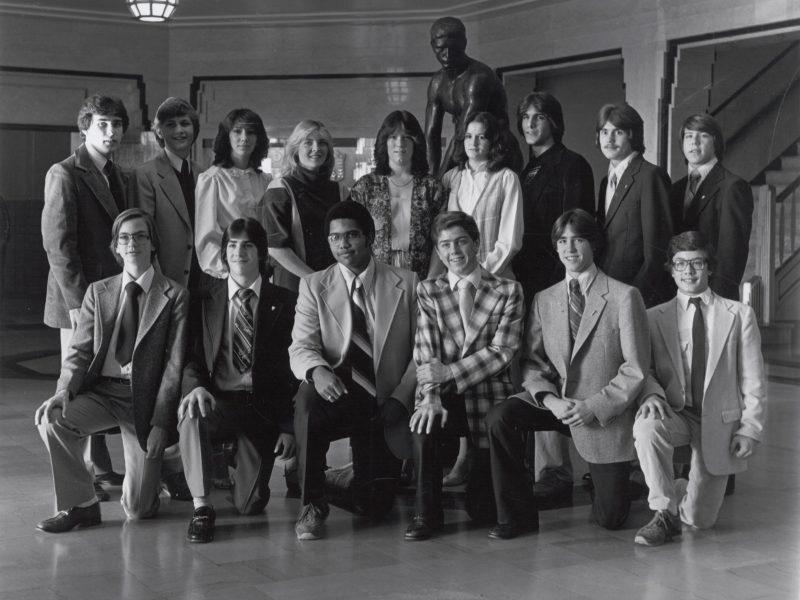 One of Chris’ favorite memories is when the boys’ basketball team won the 1981 state championship led by classmates, Mike Greene and Pete Smith. “There was a lot of Spartan pride in the Hersheypark Arena that day!” Chris exclaimed.

“It was my relief houseparents, Randy and Julie Mladenoff, who had a huge impact on my life,” Chris said. “We’d have serious talks and a lot of laughs. I could not wait for those weekends.” When Chris was a senior, the Mladenoffs took her to water ski for the first time. Their friendship continues today. The Mladenoffs attended Chris’ college graduation, her wedding, and recently her daughter’s wedding. “I was fortunate to call them my colleagues for many years as a kindergarten teacher while they were elementary houseparents,” Chris said. 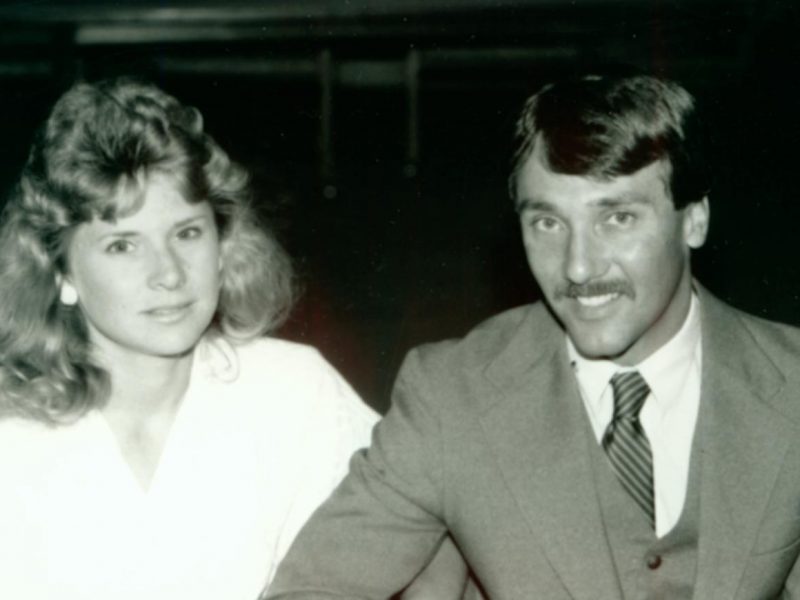 Chris said MHS enhanced her life in more ways than she could have imagined.

She credits her mother for raising her to have high standards and values, always be grateful, and help others. MHS continued what Mrs. Brennan started. Chris learned to be organized, work hard, and do her best. She learned to work with people like her, and people not like her, and to learn from and with one another. She learned how to cook daily for 19 people—16 girls, two houseparents, and their child. She learned how to be responsible, have manners, and enjoy writing, thanks to Mr. Kriebel’s classes. She learned that, although she was always competitive and loved to win, winning isn’t everything. It is important to be a good teammate and care about the team more than yourself, and to always have fun while working hard and competing. 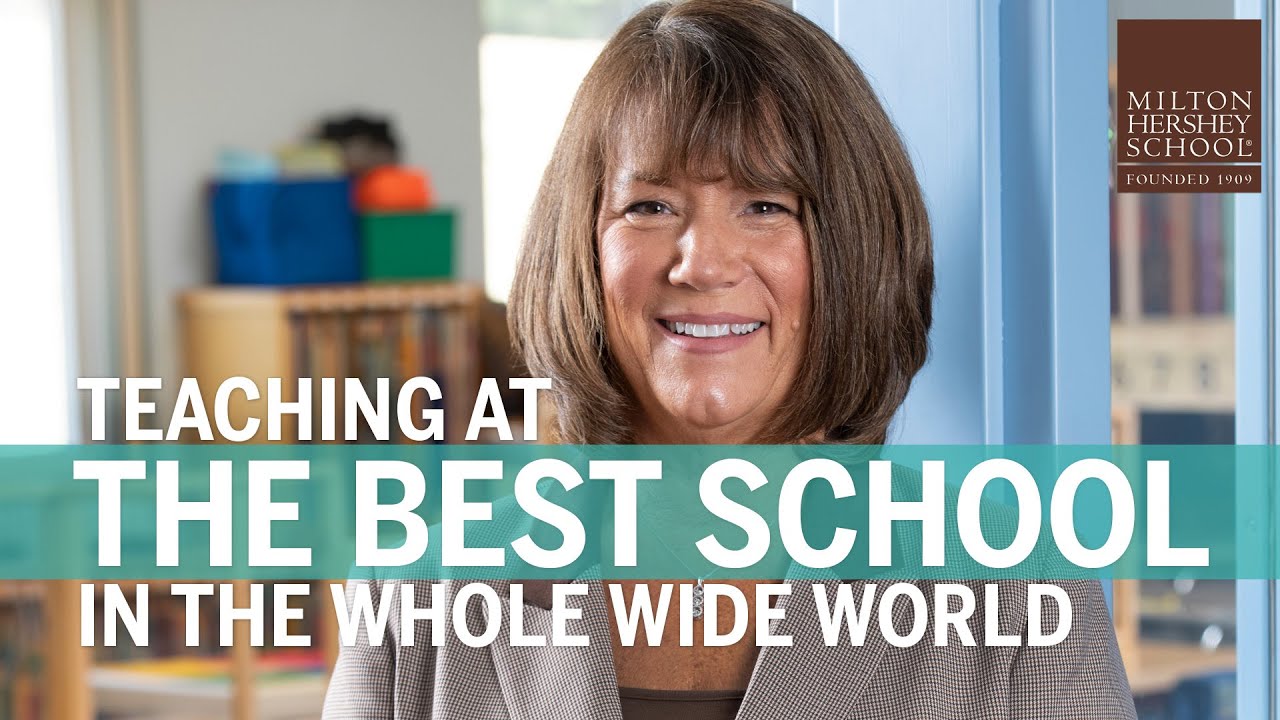 Chris came to MHS without a lot of self-confidence, but with the guidance of many caring adults, gained confidence and grew into a more self-assured person with a voice. She learned that it was okay to think and act differently than others.

More than a Career

Chris developed her commitment to mission and dedication from the role models she watched and idolized as a student. “I saw the dedication, fun, and commitment and was pulled in by the MHS magic that is difficult to describe,” Chris said. 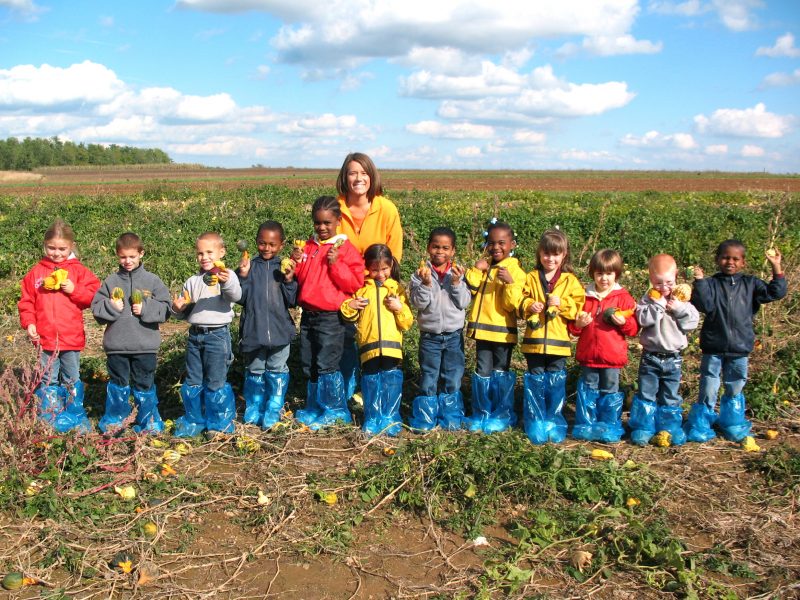 Milton Hershey School alumna Chris Cook ’81 with students in 2010 on a field trip.

Growing up, Chris loved learning and children. She also saw how much her mother missed her and her brother when they were at MHS. Knowing how difficult it is for parents to be separate from their children, Chris put extra effort into connecting with the parents and sponsors of her students, hoping they would feel like part of the team. She also created memory books, eventually digital media, complete with hundreds of photos and videos to highlight their children’s year in kindergarten.

Chris herself started kindergarten three months after her father died, and for a time, chose not to speak. She describes it as creating a protective bubble where she tried to make sense of the permanence of death as a 4-year-old. Shortly after starting kindergarten with teacher Miss Gray, whom she loved, Chris decided to talk again.

“I care deeply for my students,” Chris said. “I’ve always advocated for them and often visited them when they couldn’t be at school due to illnesses, or brought them home with me when they didn’t have family coming to visit them. I have a soft spot for the kids who really need someone the most.”

MHS is much more than a career for Chris; it has been her life. While teaching has been her career, most of her spare time involves MHS, including watching athletic events or performances, gathering with friends who are usually colleagues or alumni, attending various MHS Alumni Association events, being an active member of MHSAA over the years, including having served six years on the MHSAA Board of Directors, and continuing active participation in the Homestead Chapter. 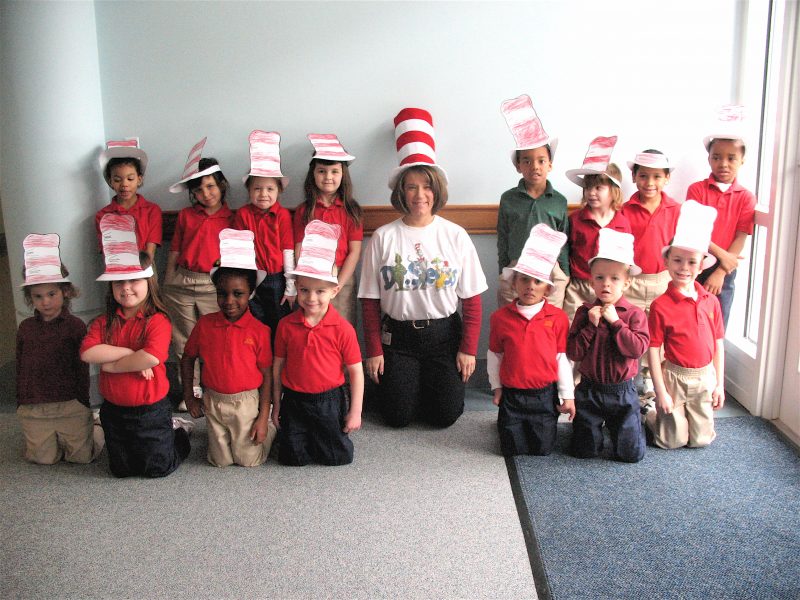 Chris with students on Dr. Seuss’ birthday in 2010.

Chris and her family have long-standing ties to MHS. She and her late husband, Ken, were married at Founders Hall on June 9, 1990, and like his father, mother, and uncle, Ken worked at MHS for more than 20 years. Ken’s father, Ken, Sr., taught electronics for more than 30 years at Senior Hall, and his mother, Mary, was a school nurse at Memorial Hall. So, Chris knew Ken’s father, mother, and uncle well before she met Ken. 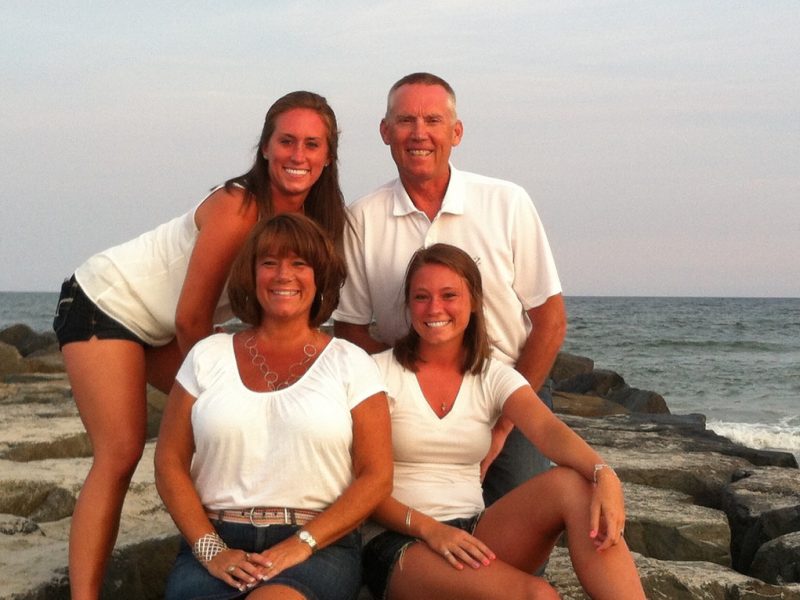 After many years as a stay-at-home dad, Ken worked in many capacities at MHS before being hired full time as a receiving clerk at the Supply Center in 1999. He was a softball coach at MHS with Chris, kept score for the team, worked in student programs with student recreation, worked in transportation as a meal bus driver and a bus driver, and drove students to their places of work and college visits. Diagnosed with renal cell carcinoma in 2018, Ken pushed through a lot of discomfort and exhaustion and continued to work until 2019. He passed away

Dec. 7, 2020. Ken was a posthumous recipient of the MHS Chairman’s Award of Excellence Medallion in 2021.

Chris’ and Ken’s two daughters, Jennifer (Cook) Shirk and Megan Cook, maintain the MHS connection. Jennifer has been teaching fourth grade at MHS since 2015 and is head coach for the varsity girls’ volleyball team. Megan Cook is a Ph.D. student at Lehigh University where she is studying school psychology. She is a practicum student with Psychological Services at MHS. 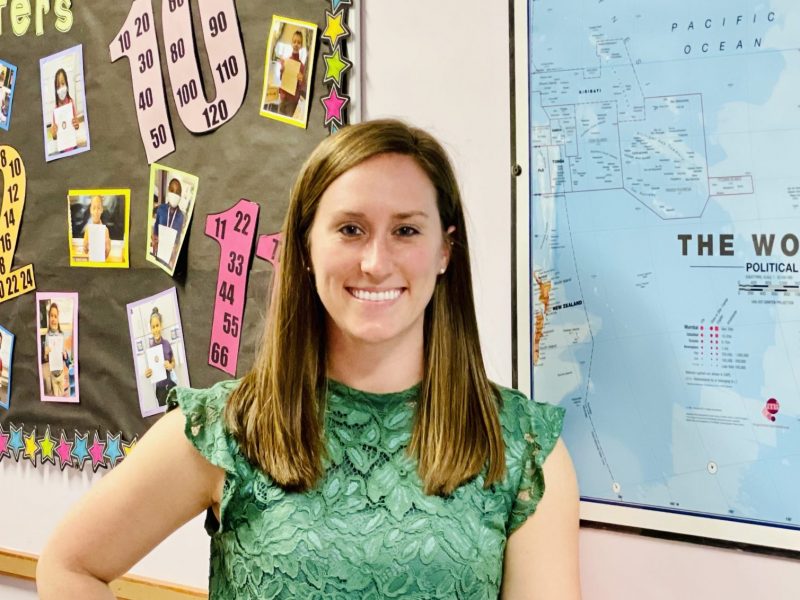 Jennifer recently married Nate Shirk, who teaches health and physical education at Senior Hall. They were introduced by Jen’s volleyball players in the fall of 2017.

During her leisure time, Chris enjoys golf—usually with MHS colleagues and friends—and exercise, and is an active member of her church. Other than this, her spare time is spent with her family, attending her daughters’ sporting and dance events when they were growing up, or doing things with MHS students in some capacity.

To this day, Chris proudly wears her MHS class ring every day. She also has a Milton Hershey section in her basement decorated with MHS collectibles and mementos. “Besides our own family fun, the times I look forward to the most are times spent with my MHS classmates and friends,” Chris said. 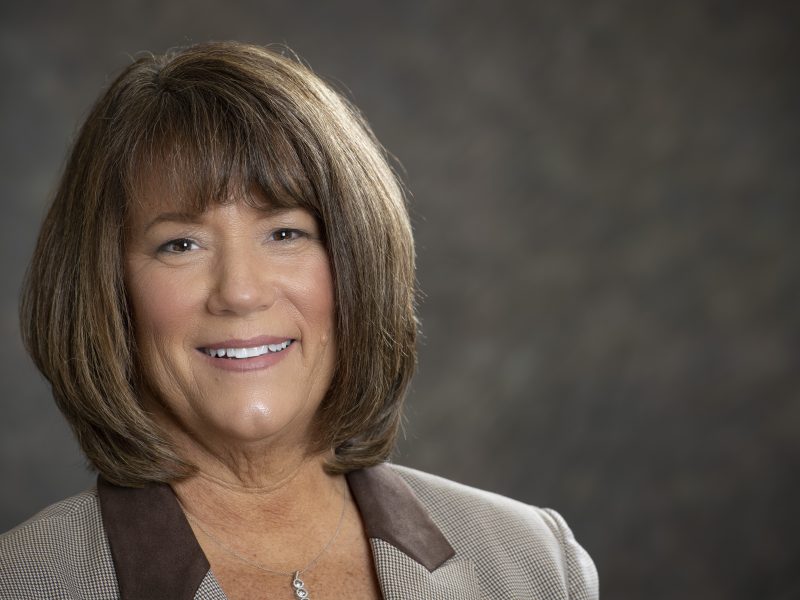 “As I drive into work each morning and get treated to the beautiful landscape of Founders Hall surrounded by glistening white snow, a beautiful sunrise, new flowers blooming, or the warm autumn leaves changing colors, I am reminded daily of how very lucky I am to be an MHS employee. Almost every day, I remind our MHS students that they are so lucky to go the best school in the whole wide world,” Chris said.

Nominate an MHS Graduate for the Award