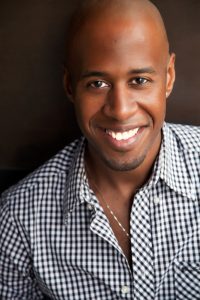 “Marcus’ performance will serve as a celebration of the Hersheys’ incredible legacy,” said MHS President Pete Gurt ’85. “It is always a joy to have our alumni return to Hershey to give back to our beloved school with the hope of inspiring our current students to reach their future goals, too.”

Raised by his mother, Marcus was active in church and sang in the choir loft as soon as he could stand. His mother enrolled him at Milton Hershey School at the start of his freshman year in 1995. During his college years at The Pennsylvania State University, he continued writing music and creating harmonies.

After growing as a singer and songwriter, Marcus landed a role in the Tony Award winning phenomenon “RENT.” He’s also been cast in other Broadway hits, including “Motown The Musical,” “In the Heights,” “West Side Story.” In 2015, he starred in NBC’s “The Wiz Live.” Learn more about Marcus Paul James.