MHS Graduate is the Top Triple Jumper in the USA 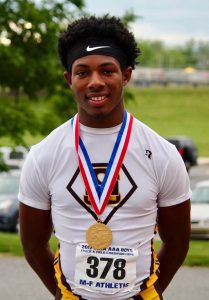 Treyvon, now a rising sophomore at The University of Kansas, won the triple jump event by leaping 52-11. With his win, he will advance to compete in the Pan American U20 Championship this July in Costa Rica.

While a student at MHS, Treyvon set the school record in triple jump at 50′ 9.5″ and had many track and field highlights including:

Congratulations Treyvon and best of luck next month!