Prior to the annual tradition of Milton Hershey School’s (MHS) senior class tree planting, commemorating Founders Week was celebrated in several ways. Recent discoveries from newspaper archives have revealed various ways our school’s founding had been recognized. The Hershey Press reported that on the first anniversary of the school, the Board of Managers visited, took a tour given by Superintendent George Copenhaver, and had an excellent dinner provided by Mrs. Copenhaver. 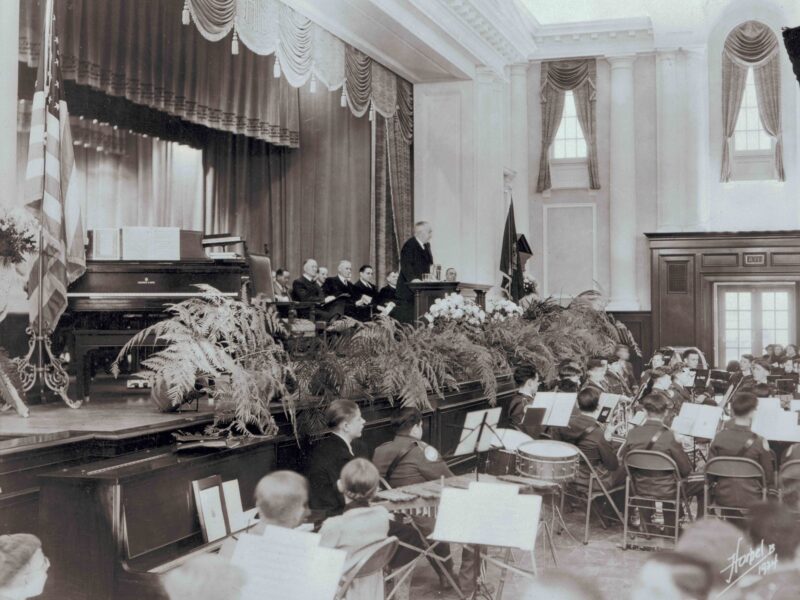 The school’s 25th anniversary was marked by the dedication of the new Junior-Senior High School, now named Catherine Hall, on what was called Pat’s Hill overlooking the town of Hershey. At the event, D. Paul Witmer, designer, and builder of the school, presented the keys to Milton Hershey. Keynote speaker, Dr. James N. Rule, Superintendent of the State Department of Public Instruction said, “there is no school organization in Pennsylvania or in the country which excels the new school in its comprehensive provision for the education of boys.”

The Harrisburg Evening News reported that in his brief talk, Milton S. Hershey “emphasized the point that men of wealth should, while they are still alive, give of their money for the betterment of their fellows, for they cannot take their wealth with them when they cease to exist here.” 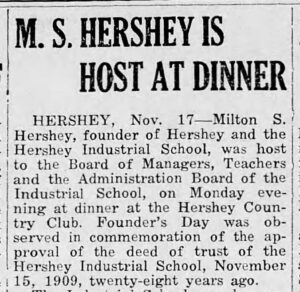 In 1937, the Elizabethtown Chronicle noted Milton Hershey hosted a dinner at High Point Mansion for teachers, administrators, and Board of Managers of the school to commemorate Founders Week. During the dinner, class of 1935 alumnus, Ray “Rip” Ripani’s orchestra provided entertainment. Milton Hershey remarked, “One of the days of the year I enjoy the most is to see the results of our school.”

The 30th anniversary of the school’s founding was celebrated in 1939 at the Hershey Community Theatre with more than 1,000 Hershey Industrial School students in attendance. A student presented Milton Hershey with a basket of roses with the sentiment that, “it is our sincere hope that by this small token, we may express in miniature our deep appreciation and thanks for many generous gifts to us.” Mr. Hershey bowed his thanks and the audience applauded.

During the message “Youth Looks Forward,” from Dr. Francis B. Haas, Superintendent of the Public Instruction of the Commonwealth of Pennsylvania, urged the boys to take an inventory of themselves and to cooperate. Milton Hershey said, “I want to say frankly that what the speaker told you has been my own experience. So, if you take the lesson to heart, get acquainted with yourself.” 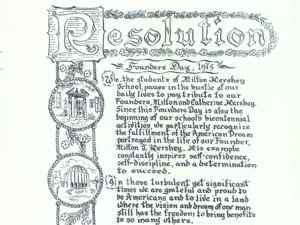 In 1975, Founders Day kicked off the school’s bicentennial activities. The Senior Student Senate passed a resolution for the occasion creatively drawn by art teacher Clyde Stacks and published in the December issue of the student-produced publication, The Spartan.

The resolution stated, “we particularly recognize the fulfillment of the American Dream portrayed in the life of our founder, Milton S. Hershey. His example constantly inspires self-confidence, self-discipline, and a determination to succeed.” His words still ring true today.

Learn More About MHS and Our School History