It’s fitting that the Deed of Trust creating Hershey Industrial School—now known as Milton Hershey School—was signed by Mr. and Mrs. Hershey on November 15, 1909 during the season of harvest and thanks.

Giving back to others, nurturing, and growing were important to the Hersheys. As MHS works to grow enrollment to 2,300 students, there is more reason than ever to give thanks. Throughout the school’s history, Thanksgiving has been celebrated in a variety of ways:

1. In 1913, the school invited the community to a special Thanksgiving program.

The earliest Thanksgiving celebration on record is a program given by the school for the Hershey community in 1913. The program was held in the old dance pavilion in Hersheypark and was advertised in Hershey’s weekly newspaper. The school’s superintendent at the time, George Copenhaver, urged the Hershey public to attend the program by saying they “could hardly spend a more pleasing and novel hour than to dedicate it on Thanksgiving Eve to these little charges of the Founder at his noble benefaction.”

The newspaper made it clear that there was no price of admission for the program except to say “thank you!” The program featured a Thanksgiving song selection by the Hershey Orchestra, a reading of the Governor’s Proclamation by Daniel Copenhaver, and recitations and songs by students at the school.

Thanksgiving during the 1930s, 40s, and 50s meant a large dinner of roasted duck or turkey. In a 1934 report from farm home Springdale published in a school publication, we learned that “after giving their digestive systems some real labor by consuming seven ducks as a portion of a most delightful Thanksgiving dinner, the boys of Springdale await the Christmas feast.” Many students in the farm homes enjoyed giving thanks to Mrs. Copenhaver for their “splendid” turkey dinners. 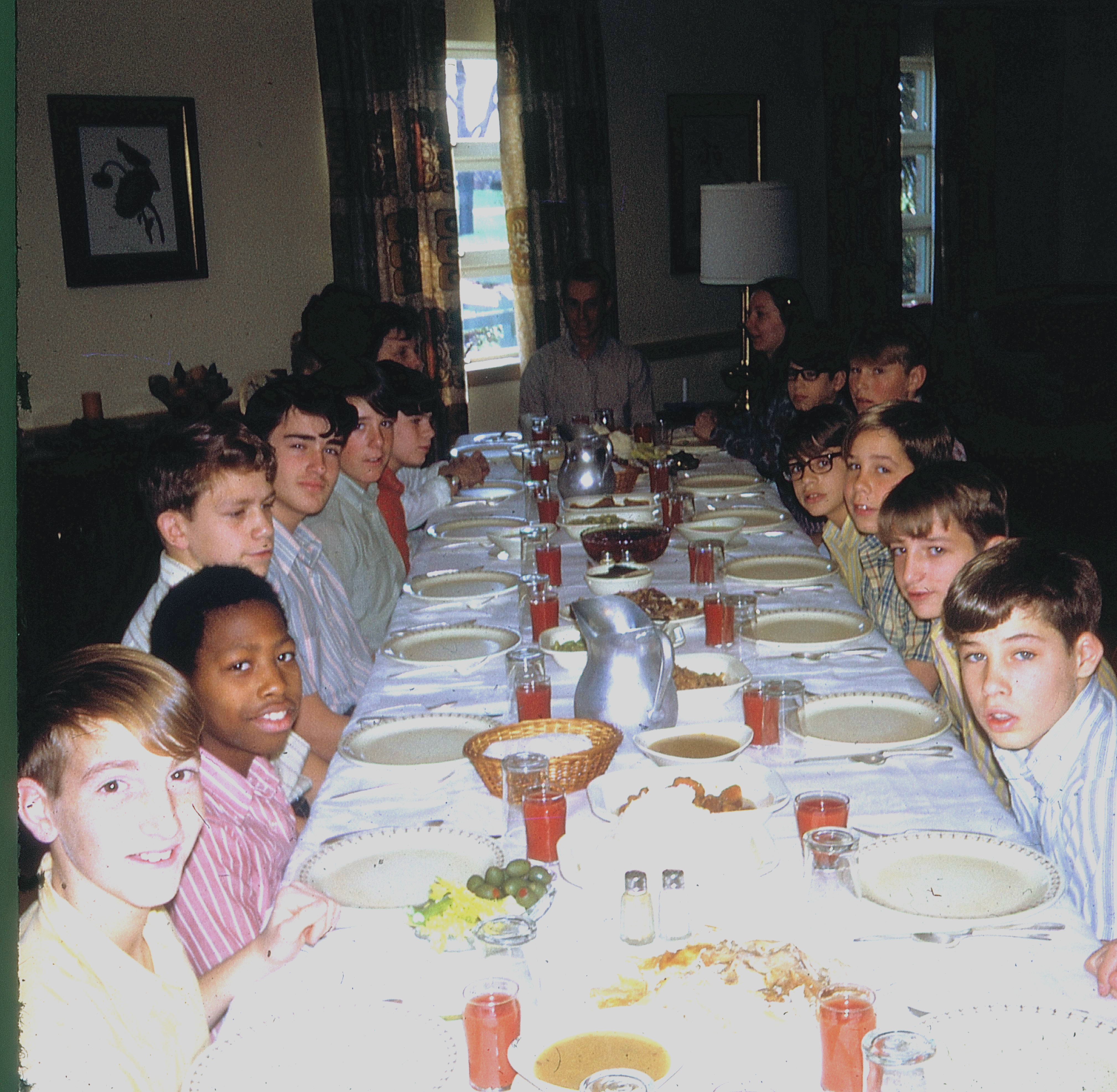 3. An annual football game between student homes was an after-meal tradition.

Though the meal was appreciated, the highlight of the day for many students was the annual football game between student farm homes. The games were described in a variety of ways, including a “Mud Bowl” one year and a “Municipal Cow Pasture” in another. This tradition is a fond memory for many alumni.

4. A 1938 snowfall led to ice skating instead of football.

There was snow on Thanksgiving in 1938, so the activity was ice skating instead of football. In this photo from the early 1930s, Maurice Miller ’34, Edward Uhrich ’33, Richard Mullikin ’35, Warren Herr ’34, and E. Darlington Poticher ’35 are ready for whatever the day brings. 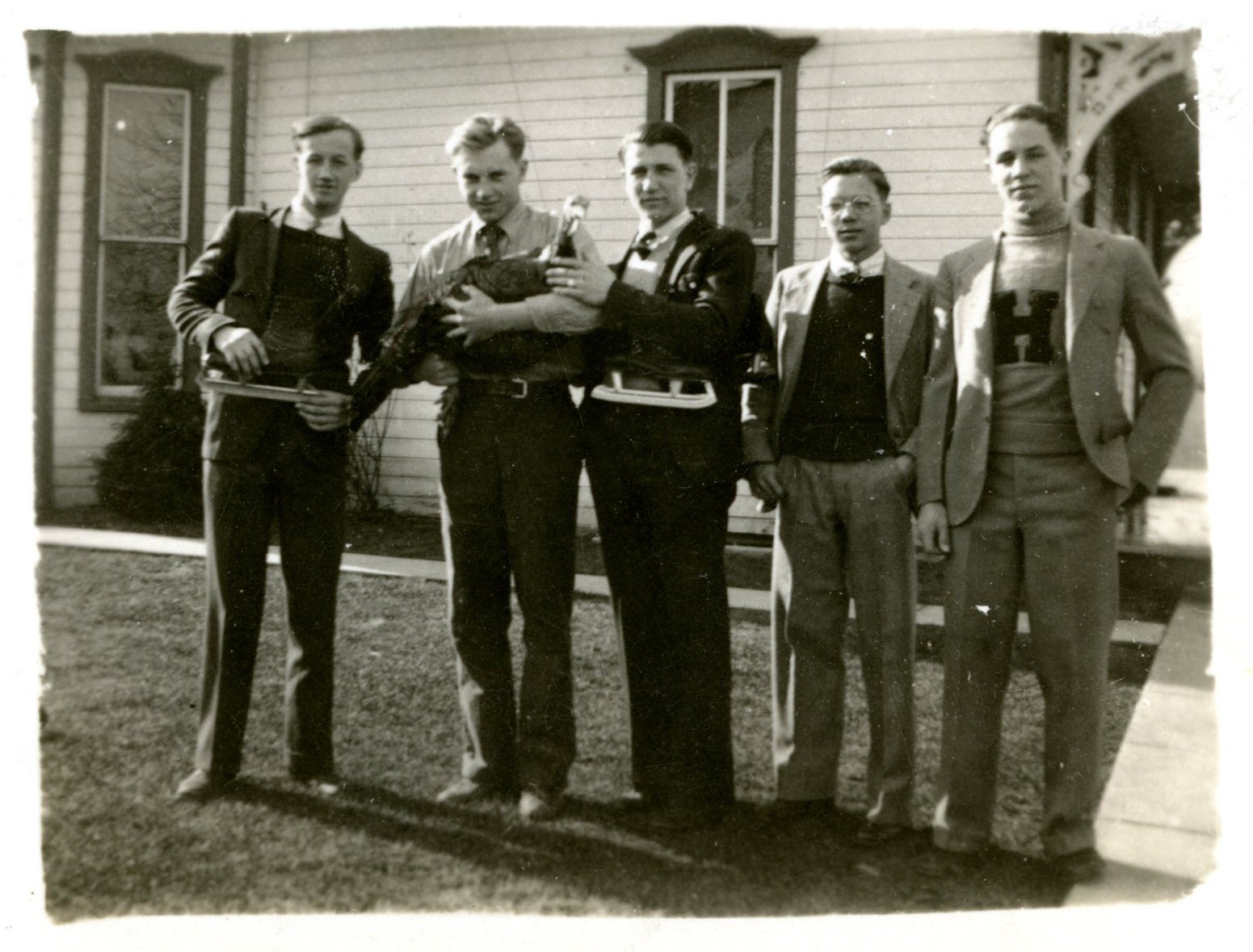 MHS President Pete Gurt ’85 created the Founders Feast tradition, a special program and dinner to commemorate the generosity of MHS founders Milton and Catherine Hershey and celebrate the more than 107 years the school has been changing lives for the better.

During the event, students enjoy a meal and share what they are grateful for and the messages they wish they could share with our founders. 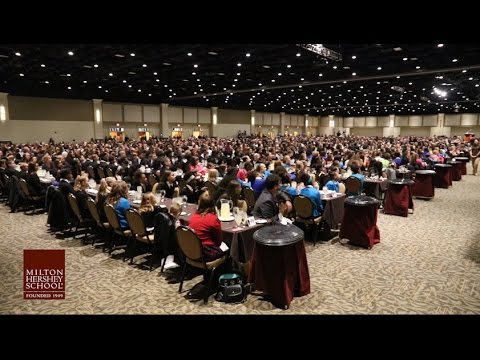 During the weeks leading up to Thanksgiving, the students and staff at Milton Hershey School are reminded that Milton Hershey’s wish was for students to take their place in life and become useful citizens—this is how Mr. Hershey wanted to be thanked. Students show their gratitude by celebrating Founders Week and continuing to display thankfulness throughout the Thanksgiving holiday and beyond.