Coming from inner-city Philadelphia, Pennsylvania, Tykee Branch-Hamilton ’18 found his way to Milton Hershey School as an eighth-grader eager to pursue opportunities and success.

While an MHS student, Tykee played for the boys’ varsity baseball and football teams, was a resident assistant in the MHS Transitional Living program, and a member of the National Honor Society. During his senior year, Tykee was named Hershey Rotary Student of the Month and received a Varsity H award—the school’s highest athletic honor.

“MHS prepared me for the real world by teaching me to be independent, self-reliant, and to be able to make smart decisions that will lead to my success,” he shared. “MHS taught me how to push through the hard times and allow those times to make me stronger.” 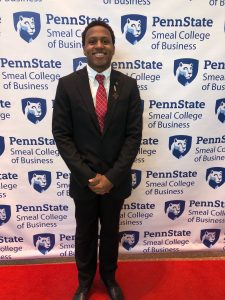 Currently, Tykee is studying supply chain and information systems at the University Park campus of The Pennsylvania State University. He had a deep feeling of excitement and nervousness as he began his first year, but he was ready to use the skills and relationships he had gained at MHS to help him reach his dreams.

Leaving MHS makes it harder to maintain strong relationships with friends and adults you have grown close to, but Tykee knew he needed a few people to walk this journey with him—including the Graduate Programs for Success (GPS) Division at MHS.

“GPS helped me whenever I had questions or didn’t know what to do,” Tykee said. “GPS isn’t something you only utilize when you’re in trouble; it’s there to help and support you whenever you need it.”

Tykee credits his houseparents, Phil and Cathy Bertrand; his baseball coaches, John Karavage and Eric Shur; and his teachers, Jennifer Drey and Laurie Shreckengost with supporting him through his first year as an MHS graduate. “They reach out to me to make sure I am doing well and it has helped a lot,” he said.

During his first semester at Penn State, Tykee struggled because of the transition and a lack of motivation to work as hard as he did at MHS—something he knew he needed to change. But what caught Tykee off-guard the most was the independence he felt to make his own decisions.

“At MHS you think that you’re independent, but in college you have a new found sense of what independence really is,” shared Tykee. “There isn’t any adult telling you what to do; even my mom was hundreds of miles away.”

Tykee’s first semester served as a time of learning and self-discovery. In January 2019, Tykee came prepared to start his second semester with a different mindset on how to succeed. “I was ready to start off strong, and I did,” he said. “When I put my school work first, it made me less stressed and I was able to see better results in my grades.”

Although Tykee did not see the results he wanted at first, he had to remember all that he had overcome and accomplished to be attending college as a first-generation student. Keeping that mindset motivated him to push his boundaries more during his second semester.

“I’m on my way to beating the odds and that is success in itself,” he said. “For all MHS students who may be the first in their families to graduate high school and the first to go to college, it is an accomplishment to make it through freshman year—one of the hardest years of life. Congratulate yourself for the little things and it will lead to bigger things.” 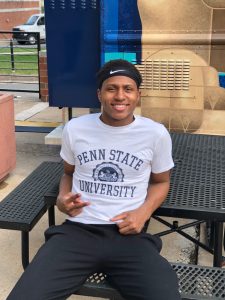 Going to such a large school like Penn State, he knew he needed to make himself stand out

to his professors in order to be remembered. Tykee did this by sitting in the first few rows of every class he had and by attending his professors’ office hours and creating a conversation with them.

Looking back on his first year at Penn State, Tykee advises all MHS students starting their freshman year to start strong and keep that momentum, because you get out of college what you give. “Do your homework first, study first, and do things that you have to do, so you can do things that you want to do,” he shared.

Moving forward, Tykee hopes to use his degree to work with The Hershey Company and their commitment to sustainability—specifically helping to end world hunger. Ultimately, he hopes to one day serve the MHS community for all that it has given him and the never-ending support he continues to see in his life.