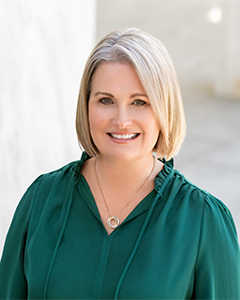 Lisa Scullin is Vice President of Communications for Milton Hershey School. Promoting the life-changing impact the school has on its students has been the highlight of her career. In her current role, Scullin and her team are responsible for all strategic communications, public relations and crisis communications, engaging internal and external stakeholders, as well as supporting the marketing efforts of Admissions, Alumni Relations, and Human Resources.

During her time at Milton Hershey School, Scullin has spearheaded communications and outreach efforts for several major projects, most recently an early childhood education initiative. This new program is creating six centers—named the Catherine Hershey Schools for Early Learning—that will provide a cost-free education to children from birth to age 5 from economically disadvantaged backgrounds.

Before MHS, Lisa Scullin was communications director and press secretary for a leader of the Pennsylvania Senate. Previously, she worked as a TV news anchor at WHTM abc27 in Harrisburg, Pennsylvania, a reporter at WWBT NBC12 in Richmond, Virginia, an anchor/reporter at WBOC-TV 16 in Salisbury, Maryland, and a producer at CNBC. Her experience conveying breaking news and current events to viewers pales in comparison to sharing the historic works of Milton Hershey and his school.

Frequently recognized by her peers, Scullin’s awards include honors from the National Academy of Television Arts and Science, the Public Relations Society of America, and the American Advertising Federation. An active member of her community, Scullin has served the American Red Cross, the Rotary Club of Hershey, and is a charter member of the Lebanon County NAACP. Additionally, she and her family created a scholarship to support underrepresented candidates pursuing careers in teaching.